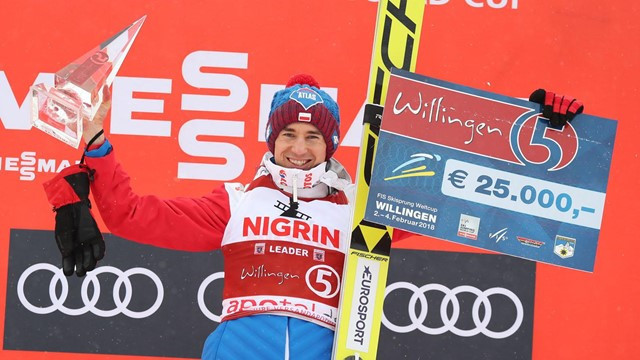 Poland’s Kamil Stoch had the best possible preparation for the defence of his two Olympic ski jump titles at Pyeongchang 2018 as he secured overall victory at the International Ski Federation (FIS) World Cup in Willingen in Germany.

Norway's Johann André Forfang won on the second day of competition but second place on the day, allied to the fourth place he had earned yesterday, was enough to give the 30-year-old Pole the €25,000 (£22,000/$31,000) prize as winner of the Willingen 5.

Stoch also travels to South Korea having restored himself as leader in the World Cup standings with 863 points, followed by Germany’s Richard Freitag on 820 and Andreas Wellinger on 736.

"It was really a good weekend for our entire team," Stoch said.

“I'm happy and satisfied with my result today and with the whole weekend.

"Tomorrow afternoon we will be flying to Korea.

"I have no expectations, I hope the weather conditions will be fair for everyone and there'll be a nice atmosphere."

It was a good day for Norway too as Forfang’s team-mates Robert Johansson and Daniel-André Tande in fourth and fifth, offering evidence that their nation will offer a strong challenge to Poland at Pyeongchang 2018.

The first training for the Olympics is due to take place on Wednesday (February 7).

For Forfang this was the second World Cup win of his career - he claimed his first in 2016 in Titisee-Neustadt.

He is already the fourth Norwegian jumper to win in the World Cup this year and the 10th different jumper who could win this season.

"I think that the Norwegian team is capable of fighting for a medal in every competition at the Olympics," he said.

The scheduled Women's FIS Ski Jump World Cup event at Hinzenbach in Austria was cancelled due to lack of snow.