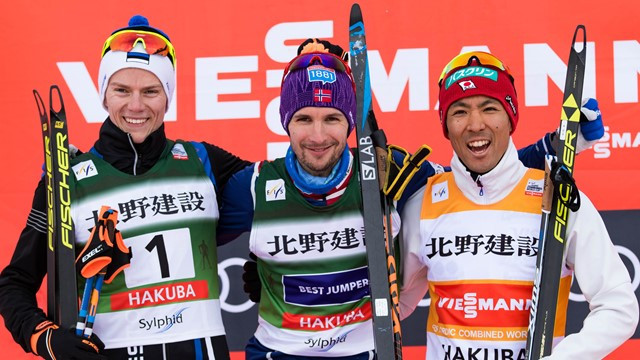 Norway’s Jan Schmid sent out a last minute signal ahead of the Winter Olympic Games in Pyeongchang as he ended Akito Watabe’s run of four straight wins on the International Ski Federation (FIS) Nordic Combined World Cup tour with victory on the second day at Hakuba,

Watabe’s victory on home ground yesterday had established him even further in the lead in the overall World Cup standings, but the Norwegian cut the gap today with a timely performance.

Kristjan Ilves of Estonia produced his first World Cup podium result in second place, with Watabe having to settle for third.

The Estonian won the jumping round with an effort of 123.5 metres in difficult tail winds, earning a 13 seconds start in the concluding Individual Gundersen over Japanese youngster Yuto Nakamura, who had reached 120m.

Schmid and Watabe had relatively disappointing efforts of 117.5m and 116m respectively..

Ilves gave it everything and only let Schmid past him.

Schmid finished 6.6 seconds ahead, with Watabe making up ground to take third place, 11.1 seconds behind, although he required a photo-finish with Tomáš  Portyk of the Czech Republic, who was eventually given a time of 11.2 seconds behind..

Nakamura, meanwhile, slipped back down to 20th position overall.