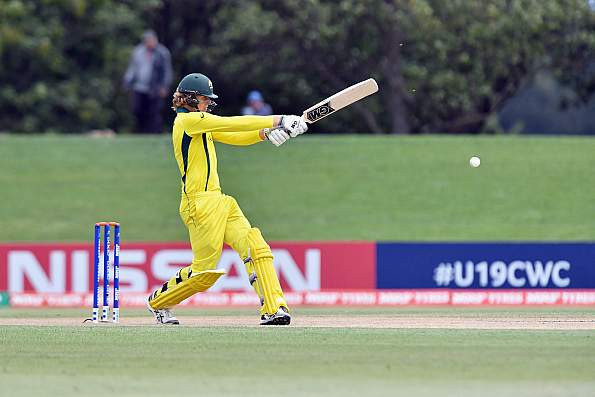 A clinical performance from the bowlers and Jack Edwards helped Australia overwhelm Afghanistan in the first semi-final of the International Cricket Council Under-19 World Cup in New Zealand.

Set 189, Edwards raced away towards the target and ended with 72 as Australia polished off the chase in 37.3 overs with six wickets in hand.

Afghanistan opted to bat but failed to make good use of the decision.

The next best score came from Rahmanullah, the opener, who made 20 while Mujeeb Zadran chipped in with 12.

Afghanistan got off to a slow start and soon after lost Ibrahim Zadran in the eighth over.

Rahmanullah and Khil helped the team go past 50 and looked set for more but they were separated as Jonathan Merlo dismissed the former in the 17th over.

Afghanistan had just 58 on the board then and with two wickets down, the pressure was squarely on them.

Khil kept the Australian bowlers at bay but a flurry of wickets meant there wasn't much he was able to establish.

With no lower order resistance happening or no partnerships flourishing at the top, Australia managed to stay on top right throughout and keep their opponents on the mat.

Once the bowlers had done their job, Edwards did just what the team needed.

With a small chase ahead of them, and the possibility of a spin attack coming in later, he attacked up front to push Afghanistan on the backfoot.

He got the innings going with three boundaries in the fifth over.

At 26 for no loss after five, Afghanistan looked desperate for the much-needed early breakthrough.

Mujeeb provided them an opening when he had Bryant caught at mid-off.

However, there was very little for the Afghanistan bowlers after that as Edwards continued to make them toil.

He raced to his half-century off 40 balls and with Jason Sangha scored 77 for the second wicket to take the team past 100.

There was a wobble in the end when Australia lost Jonathan Merlo and Edwards in the 26th over.

However, Australia were just 34 away from a win when Edwards fell and the wickets came in a little too late for Afghanistan.