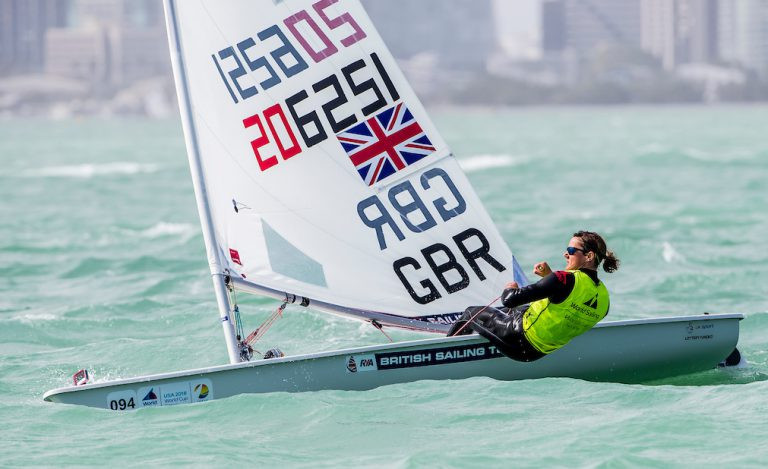 Britain's Alison Young, racing in the laser radial class, had her work cut out to secure gold on the final day of the 2018 Sailing World Cup in Miami.

Only two of the five medal races offered doubts as to who would take overall gold following results earlier in the week, and the laser radial was the most wide-open of the classes on the day, with nine of 10 sailors starting mathematically alive for a medal.

Tina Mrak and Veronkia Macarol of Slovenia carried a decent but not decisive lead into the final women's 470 division race - and carried it out at the other end to claim gold, despite a mid-race dip to fourth place which held out brief hope to their challengers.

Defending champions Afrodite Zegers and Anneloes Van Veen of The Netherlands, second going into the race, lost crucial time with equipment issues that required Van Veen to come off the trapeze and spend a few minutes inside the boat.

They eventually finished 10th, and dropped to fifth overall.

With his gold medal in the laser class locked up courtesy of a 30-point advantage, Australia's Tom Burton decided to use the medal race to work on his starts.

Despite having registered two race wins and eight top-seven finishes in this event, Burton was not satisfied with his ability to get off the line.

But he set off a fraction early to earn disqualification, and was content to follow the fleet around, finishing ninth and still winning the class by 17 points.

And Sam Meech of New Zealand, the bronze medallist from Rio 2016, was lurking just three points back.

Buhl took silver, with Thompson finishing strongly to claim bronze after falling behind Meech at the first mark.

Caleb Paine, who won finn Class bronze for the United States at the Rio Games, made the most of his time on the home water of Biscayne Bay as he took silver behind Britain's Olympic champion Giles Scott, who was already assured of gold before the final race began.

Paine started the medal race needing to place one boat between himself and Alican Kaynar or Turkey to move from third to second in the overall standings, while also not letting Ioannis Mitakis finish too far ahead.

"I think consistency in the top positions is key and that applies to most fleets," Scott said.

"The trick is just to say steady and easy into it at the start and don't do anything outstanding during the first couple of races of an event.

"You just keep plugging away and try and secure the top three results.

"This was my strategy in Miami."

In the men's 470, Britain's Luke Patience and Chris Grube of Britain also claimed gold having led the fleet for the majority of the week, winning by a 27-point margin from the French pairing of Kevin Peponnet and Jeremie Mion.