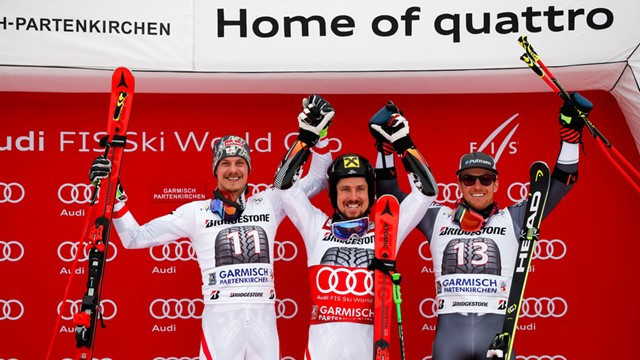 Marcel Hirscher moved to second on the all-time list of International Ski Federation (FIS) Alpine Ski World Cup winners behind Ingemar Stenmark with his 55th victory in the giant slalom at Garmisch-Partenkirchen.

Hirscher’s latest win moved him one clear of compatriot and double Olympic champion Hermann Maier on the list, although he needs another 31 wins to equal the record of the Swede who retired in 1989.

The 28-year-old Austrian, six times world champion, is seeking a seventh overall World Cup title in a row - but his form offers huge hope that he will secure the one individual medal to elude him so far, an Olympic gold.

In what was the penultimate World Cup before Pyeongchang 2018 - the last is due to be the Stockholm City event on Tuesday (January 30) – Hirscher took early control in the first run, finishing in pole position ahead of his two big rivals Ted Ligety of the United States, who was 0.63 seconds behind, and Alexis Pinturault of France, who trailed by 0.94.

Between them, these three skiers have won 44 of the last 48 World Cup giant slaloms, a record going back to February 2012.

Ligety, who has suffered back and knee injuries recently, produced a solid second run to earn him third place and a welcome boost as he prepares to defend his giant slalom title at Pyeongchang 2018.

As so often, Hirscher maintained his momentum on the second run and was able to hold on to his lead to finish 1.57 seconds ahead of his contenders.

That meant seven wins out of eight giant slalom races, and 10 wins in all on this season’s World Cup circuit.

And, of course, 55 World Cup wins in career.

Meanwhile Slovakia’s Petra Vlhova took advantage of a critical mistake by world and Olympic slalom champion Mikaela Shiffrin in Lenzerheide to earn her first World Cup title since the opening day of the season.

The final ladies' slalom race before the 2018 Pyeongchang Winter Games seemed all but locked up by Shiffrin, winner of the first run, when she held more than a one-second lead at the final intermediate of the second run.

Surprisingly, however, the 22-year-old American got kicked onto her heels on the last pitch, tried her best to recover through the final hairpin, but ultimately missed the fourth to last gate on the course.

Vlhova was rewarded for her attacking second run, moving up five positions to take the win 0.10sec ahead of Frida Hansdotter of Sweden.

Crowd favorite Wendy Holdener of Switzerland, winner of the Alpine Combined race held on Friday, collected her second podium of the weekend in third.