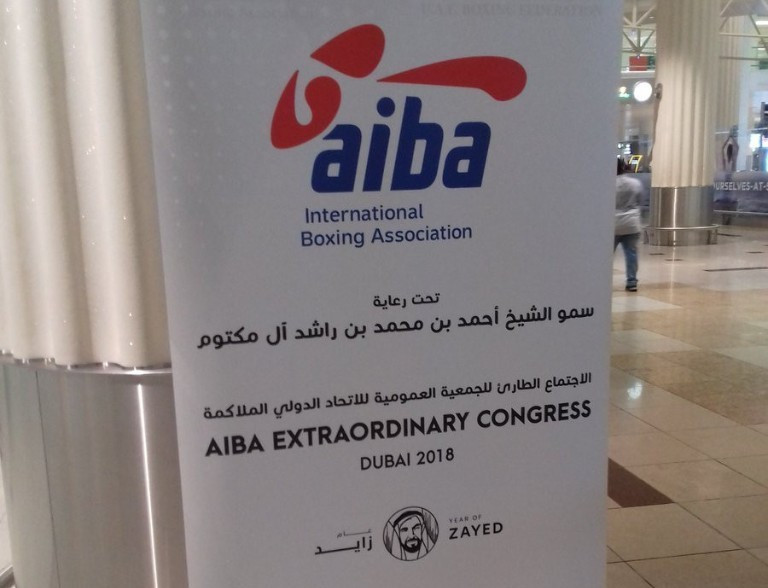 A presentation on a future International Boxing Association (AIBA) management plan will be among the main focuses of the governing body's Extraordinary Congress tomorrow.

The Congress, due to take place at the Ritz Carlton here in the United Arab Emirates, will be the first to take place since the resignation of former AIBA President CK Wu in November.

Wu resigned from the post after reaching an agreement with the AIBA Executive Committee, which saw the Taiwanese official depart his role but be proposed as Honorary President.

He had been provisionally suspended by the Executive Committee prior to his resignation after they allegedly uncovered fresh allegations of wrongdoing, which ultimately led to the end of his Presidency after 11 years in charge.

National federations at tomorrow's Congress are set to be presented with the next steps the governing body are set to take following Wu's departure.

This is expected to include an explanation of the organisation's management structure for the coming year, in the build-up to another Congress in November.

A vote is also set to take place on the "Honorary Presidency Nomination", the seventh item on tomorrow's agenda.

AIBA are being led on an interim basis by Italy's Franco Falcinelli, a current vice-president and President of the European Boxing Confederation.

The 72-year-old has indicated he may not seek to become AIBA President on a permanent basis, however the full-time replacement of Wu is set to come from the existing Executive Committee.

Under the AIBA statutes, candidates must have a "record of serving in the immediate past for a full four years mandate as an EC member", as well as being nominated by 20 national federations.

A total of 19 members of the Executive Committee would have served a four-year term by the Congress in November.

There will also be a presentation on a number of amendments to AIBA statutes tomorrow, although changes to the process of electing the President are unlikely to be made.

Instead, focus is likely to be placed on resolving issues which were claimed to have arisen in recent months during the power struggle at the organisation.

This could potentially include installing a measure where the Executive Committee can hold a meeting without the presence of the President, should a certain number of members be present and a chair of the meeting can be appointed.

insidethegames understands changes could also be made to give the Executive Committee more power over the organisation's executive director in future.

An Interim Management Committee (IMC), consisting of the current Executive Committee, were accused of acting unlawfully in August when they suspended William Louis-Marie, who later resigned from the organisation.

It is likely that a potential statute change could be made to ensure the Committee have a say in the hiring or firing of the executive director.

The current statutes only give the President the power to appoint or dismiss the executive director.

Reports will also be given by the Interim President and the Executive Committee regarding AIBA's activities.

A key area which is expected to be discussed is the governing body's financial situation, which has been the subject of major concern in recent months.

AIBA will hope to provide their membership with reassurance that the organisation's financial difficulties are being tackled.

They will also have to convince the IOC, with the organisation previously expressing concerns about "governance, financial and technical issues".

AIBA were told they must produce a full report outlining their solutions to these problems by the end of this month.

Until then, no money will be paid to the governing body by the IOC except to facilitate the running of competitions, including the Summer Youth Olympic Games in Buenos Aires.

Boxing competitions at Rio 2016 received widespread criticism due to several decisions believed to be suspect.

The IOC Executive Board responded to concerns over AIBA last year by removing two men's events from the Olympic programme for Tokyo 2020 in order to make way for two additional female ones.

AIBA had been hoping to add the extra female events and only sacrifice men's quotas rather than actual medal events.

A "report on 2020 Tokyo Olympic boxing competition issue" has been included on tomorrow's agenda, where there is likely to be discussion over the weight divisions which may make way from the men's programme.

Last July, Falcinelli had suggested the men's light flyweight category could be the one to be sacrificed, claiming that it usually has the least boxers and "most of them have a difficult time reducing their weight".

Approval of new memberships and preparations for the AIBA Congress in November are also included on tomorrow's agenda.

Informal continental meetings have taken place today, prior to the Congress.