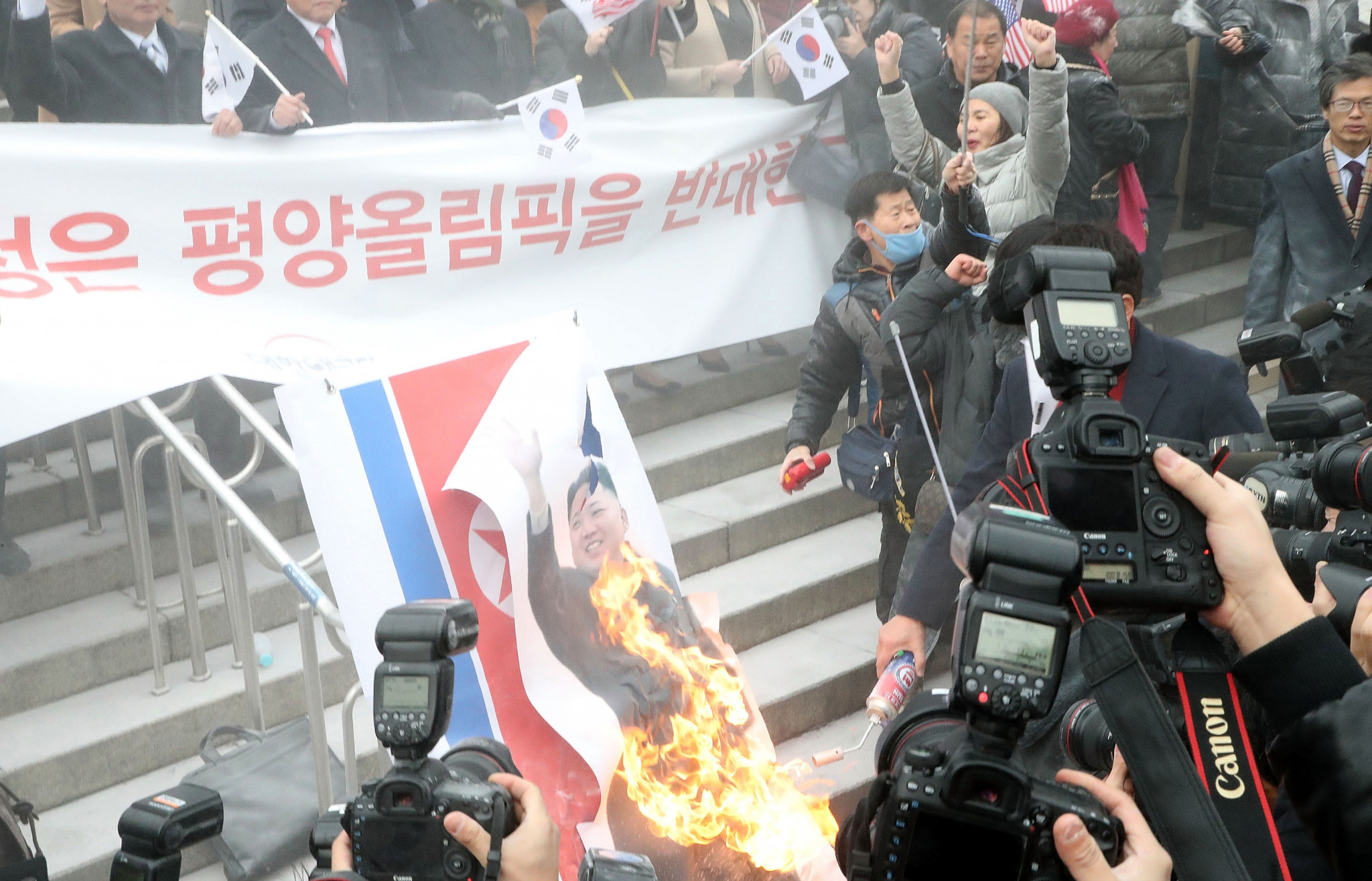 Protests were held against North Korea as a delegation from the country arrived in South Korea's capital Seoul and visited some of the Pyeongchang 2018 Winter Olympic and Paralympic Games venues.

The delegation was led by the head of the Samjiyon Orchestra, Hyon Song-wol, with their visit designed to take in potential venues for joint cultural performances during next month's Winter Olympics.

They visited Seoul and Gangeung, which is due to be the home of ice sports at the Games.

Twenty-two North Koreans will participate at the Pyeongchang 2018 Winter Olympic Games in three sports and five disciplines, after this was approved by the International Olympic Committee on Saturday (January 20).

The athletes include a unified Korean women's ice hockey team, which will mark the first time that the two nations have ever competed together as one team at the Olympic Games.

They will march as "Korea" at the Opening Ceremony under the unification flag, where there will be a male and a female flagbearer representing both countries.

The acronym "COR" will be used both here and for the ice hockey team but athletes will compete separately in all other events.

The agreement followed rare diplomatic talks between North and South Korea, with the former's involvement in the Games being widely praised.

There has also been some criticism in South Korea about the decision, with an online petition urging the Government not to form the joint ice hockey team now reportedly receiving more than 40,000 signatures.

A Gallup Korea opinion poll last week cited the issue as the primary reason why the approval rating of President Moon Jae-in had dropped to 67 per cent.

A group of protesters set fire to the North Korean flag and a photo of their leader Kim Jong-un, which was then extinguished by local police.

According to Reuters, protesters also held up a sign which read "we're opposed to Kim Jong-un's Pyongyang Olympics", asserting that North Korea had taken away attention from South Korea's hosting of the Games.

At least three North Korean players will feature in each match but South Korea's Canadian coach Sarah Murray will be in charge of the team.

All others would have not qualified otherwise and have benefited from additional quota places.

Jong Kwang-bom and Choe Un-song will race in the men's 1,500 and 500 metres short-track events.

Pairs figure skaters Ryom Tae-ok and Kim Ju-sik, bronze medal winners at last year's Asian Winter Games, are the only North Koreans to qualify for Pyeongchang 2018 by right, although they needed to be awarded an extra quota place after a deadline set by the International Skating Union to register them for the Olympics was missed.

South Korean President Moon Jae-in has called for the public to back North Korean involvement in the Games, asserting it was a potentially vital but fragile opportunity to help ease relations between the two countries.

"Right now, we are facing a very precious opportunity to peacefully resolve the North Korean nuclear issue and establish peace on the Korean Peninsula," Moon said, according to Yonhap News.

"It is entirely due to the Pyeongchang Winter Olympic Games and Paralympic Games that allowed the South and the North to sit face to face.

"Such dialogue came dramatically, while the possibility of war again loomed.

"But the current condition is so fragile that no-one can be optimistic about how long the dialogue will last.

"There may be many difficulties in talks that come after a long disruption, but we will need efforts by both the South and the North to overcome such difficulties one by one."