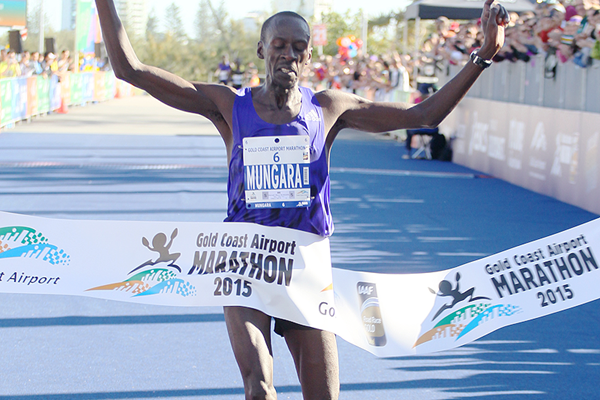 Kenya has named 44-year-old Kenneth Mburu Mungara as part of its marathon team for this year's Commonwealth Games in the Gold Coast.

Mungara, who holds the master's 40-44 age group world record in the marathon of two hours 07min 36sec, received his call-up after several of Kenya's better known runners turned down the opportunity to compete at Gold Coast 2018.

Mungara has good memories of the Australian city having won the Gold Coast Marathon in 2015 and 2016 and finished second last year.

His victories in the Gold Coast are among 10 career wins, including the Toronto Waterfront Marathon four consecutive times between 2008 and 2011.

Joining Mungara on the team is another former winner of the Gold Coast Marathon, Nicholas Kamakya, who crossed the line first in 2011.

The third member of the team, Julius Karinga, winner of the Copenhagen Marathon last May.

There has been some criticism in Kenya that better-known runners have not been selected for the team to compete at Gold Coast 2018, due to take place between April 4 and 15.

Among those who turned down the opportunity to run at Gold Coast 2018 was Geoffrey Kamworor, who has chosen instead to concentrate on winning a third consecutive International Association of Athletics Federations World Half Marathon Championship in Valencia.

"From April last year, we called on all athletes interested in the Commonwealth Games to register with Athletics Kenya or the National Olympic Committee of Kenya to have their names entered in the Gold Coast 2018 system," Paul Mutwii, the vice-president of Athletics Kenya and who is in charge of competitions, told The Standard in Nairobi.

"But they did not, despite numerous reminders.

"We told them that after November, no names could be entered into the Gold Coast 2018 system.

"Some athletes registered and others declined to honour our call-up later.

"We tried reaching them in vain.

"Some of them said their managers had entered them in big races in April and, therefore, they could not make the national team."

Kenya have won the gold medal in the men's marathon at the Commonwealth Games twice.

The first was Douglas Wakiihuri at Auckland 1990 and the second was John Kelai at Delhi 2010.

Shelmith Muriuki, Hellen Nzembi and Sheilah Jerotich were also named by Athletics Kenya to represent Kenya in the women's race at Gold Coast 2018.

Muriuki won last year's Mombassa Marathon, Jerotich set a course record of 2:27:34 when winning the 2017 Kosice Peace Marathon in Slovakia and Nzembi's best performance was crossing the line first at the 2014 Warsaw Marathon.

"The women's team too is made of athletes who will be eying their maiden show for Kenya," said Mutwii.

Irene Kosgei and Irene Mogake finished first and second at Delhi 2010 and Flomena Cheyech and Caroline Kemboi took the gold and silver medals at Glasgow 2014.