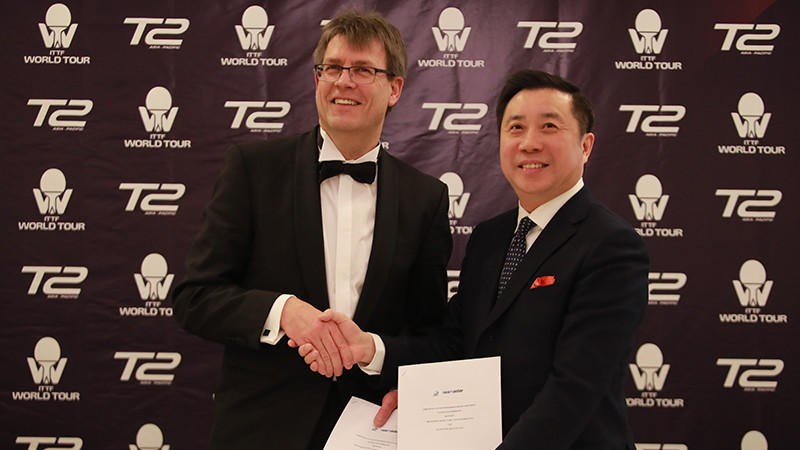 The International Table Tennis Federation (ITTF) World Tour have signed an agreement with T2 Asia Pacific with the aim of bringing in new ideas and promoting the sport around the world.

The biggest aspect of the agreement, which was signed during the 2017 ITTF World Tour Grand Finals in Astana, Kazakhstan, is that T2, a pan-regional table tennis league, will become the ITTF's competition laboratory.

This means the ITTF will be able to test new innovations such as ball tracking spin and speed in the laboratory, whilst they will also be able to develop a challenge system.

The ITTF say a challenge system could be used for decisions on edge balls and fault serves.

Commenting on the new agreement, Frank Ji, founder and chairman of T2, said: "My goal is to create an environment where our table tennis players are adored and loved by millions across the world and not just by table tennis fans.

"An environment that would attract more media attention, more television broadcasters, more fans and more money into the sport.

"I want table tennis to be one of the biggest sports in the world, and have our players become rich and famous.

"I see many synergies between the two properties, which is why this collaboration makes sense, so ITTF and T2 can work more closely together and achieve my goal of table tennis being a flourishing commercial sport."

ITTF President Thomas Weikert added: "We are very happy to have people like Frank Ji in our sport, we need more passion, more ideas and more energy.

"Twenty-eighteen is an important year for the ITTF, so we are looking forward to the collaboration, which will assist the ITTF to take the ITTF World Tour to new heights."

The first 2018 ITTF World Tour event of the year will be the Hungarian Open, which will start on January 18.