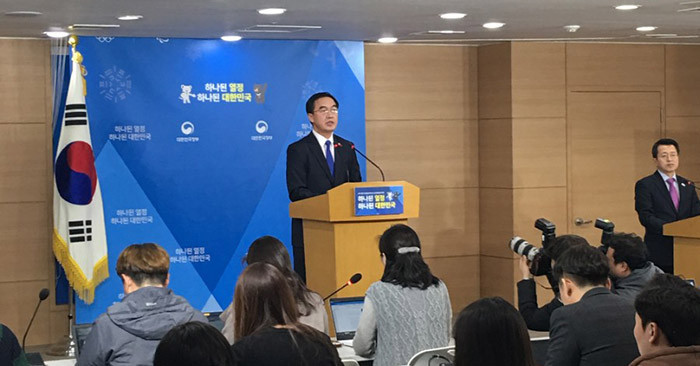 South Korea have proposed high level talks with North Korea over the country’s potential participation at the Pyeongchang 2018 Winter Olympics.

North Korea’s leader Kim Jong-un announced the country would be willing to take part in next month’s Games during a televised New Year’s Day speech.

Kim stated that the country planned to open talks with its neighbours in Seoul over their participation, with the statement the first official indication North Korea could attend.

"Taking into consideration that the Pyeongchang 2018 Olympic and Paralympic Winter Games are now only a month away, we have sent a proposal to Pyongyang to hold high-level talks at the Panmunjeom truce village on January 9,” he said.

"During the talks, we would discuss the possibility of North Korea sending a delegation to the Pyeongchang Olympics.

"We look forward to the launch of talks between the North and South, during which the two sides will be able to sit face-to-face and discuss not only the upcoming Winter Olympics, but issues directly related to improving inter-Korean ties.

“Once again, we want to make clear that our side is willing to engage in dialogue with Pyongyang without restriction as to time, place or level of formality.

"In order for high-level talks between North and South Korea to take place, we will need to swiftly normalize inter-Korean communication channels at the Panmunjeom truce village.

“Through this channel, we hope to open discussions about the meeting agenda, the makeup of the delegation, and other specific procedures.

“We look forward to hearing an optimistic response from the North."

Panmunjeom is located in the demilitarised zone between the two countries and is also known as the Joint Security Area.

Cho stated that while the focus of any potential meeting would surround North Korea’s involvement at Pyeongchang 2018, he hoped it could also allow for both sides to discuss mutual interests and improve dialogue between the countries.

South Korean President Moon Jae-in had claimed last month that the drills could be postponed to try to help encourage North Korea not to disrupt the Winter Olympics.

But US Defense Secretary James Mattis claimed there are no plans to cancel the exercises which normally involve 300,000 South Korean troops and 17,000 Americans.