Alan Abrahamson is, according to the just-released 2017 Olympic Sports Social Media Ranking report compiled by Burson-Marsteller/TSE Consulting, the journalist fourth most followed by International Federations on Twitter.

(That’s one place ahead of our own Nick Butler…meanwhile insidethegames.biz is top of the list of media most followed by Federations. Ends trumpet-blowing.)

I follow Alan myself.  He knows his sport. But I don’t follow all of his argument in the latest piece he has posted on www.3wiresports.com

Read it and judge for yourself.

A lot of what he has to say is undeniable.

The impact of the The Daily Telegraph’s recent undercover operation  - revealed on Monday (December 18) under the headline: "Exclusive investigation: World 100m champion Justin Gatlin embroiled in new doping scandal" - is surely dismaying to anyone interested in the welfare of athletics as it continues its battle against performance-enhancing drugs (PED’s).

The article starts: "Justin Gatlin, the world 100 metres champion, is at the centre of a new doping scandal after members of his team offered to illicitly supply performance-enhancing drugs."

But as Alan effectively points out, that well-used journalistic phrase "at the centre" is not all it sounds.

Gatlin, clearly, was the main target of the operation. The initiative, set in motion in July, before the twice-banned sprinter had beaten Usain Bolt to the world 100m title at the International Association of Athletics Federations (IAAF) World Championships in August, involved undercover reporters visiting Gatlin's Florida training camp.

They arrived on the pretext that they were producing a film that would require an actor to portray an athlete, and that they wanted him to look as realistic as possible as soon as possible. They succeeded, covertly, in getting Gatlin’s coach Dennis Mitchell and sometime agent Robert Wagner on film offering to supply and administer testosterone and human growth hormone to the actor.

Mitchell and Wagner were also secretly recorded claiming that the use of banned substances in athletics was still widespread as they described how positive doping tests could be avoided.

When the reporter asked how recently the agent had been involved with the banned substance, he added: "Three months ago. Before the season ended. Right now. Obviously, and as soon as the season starts."

Mitchell alleged that some athletes were using "tailored drugs" to avoid detection.

Wagner continued by naming sporting figures who were using drugs, including Gatlin. "You think Justin is not doing this? Do you think Dennis [Mitchell] wasn't doing this? Everybody does it," he alleged.

Points of fact. In 2001, Gatlin was banned from international competition for two years after testing positive for amphetamines. He appealed on the grounds that the positive test had been due to medication he had been taking since his childhood, when he was diagnosed with attention deficit disorder. The appeal resulted in an early reinstatement by the IAAF.

In 2006 Gatlin, then world and Olympic 100m champion, tested positive for a banned steroid, believed to be testosterone, On August 22, 2006, he accepted an eight-year ban from track and field, avoiding a lifetime ban in exchange for his cooperation with the doping authorities, and because of the "exceptional circumstances" surrounding his first positive drug test.

Gatlin had the ban reduced to four years on appeal in December 2007.

In 1998, Mitchell – Olympic bronze medallist in the 100m at Barcelona 1992 and a member of the gold-medal winning 4x100m relay team – tested positive for high levels of testosterone. Created, he insisted, by "five bottles of beer and sex with his wife at least four times...it was her birthday, the lady deserved a treat."

His defence was accepted by USA Track and Field (USATF). But not by the IAAF, which banned him for two years.

Alan makes some of his own points of fact. Namely that Wagner is not Gatlin’s main agent. As The Daily Telegraph has itself written in the past, former world 110m hurdles record holder Renaldo Nehemiah has filled that role since 2003.

He adds: "That’s the tipping point of this entire drama."

His point here is that The Daily Telegraph has tried to get at Gatlin through Wagner, and that it has got the wrong man.

Alan also offers detail from an email sent by Wagner to the IAAF’s Athlete Integrity Unit soon after the first meeting with the supposed film producers.

"Just four days later," he writes, "on November 21, Wagner wrote to the IAAF’s Athlete Integrity Unit: 'Now I am also an IAAF Athletes Representative and as such I would want the AIU informed and kept updated in case something is not right with their story,’ a reference to the purported production company. ‘I can tell and told this company what they wanted to hear in order to get that job and played along for a while but at some stage I have to follow the IAAF Integrity Code of Conduct and protect the people involved and myself.’…

"Elsewhere in that November 21 email, here is what else Wagner said, typos and all: 'Last weekend,’ meaning November 18-19, the day after the Whats App message to Nehemiah, ‘two people from that company came to Orlando Montverde High School for a site visit to look at the track, weight room, housing facilities and again the subject of special nutrition was discuss. Obviously I played along and told them what they want to hear but that a doctor has to be involved.

"'Dennis Mitchell specifically told them that he and his athletes are not engaged in something like that. He can propose a doctor but that’s as far as his involvement goes. We talked about the use of growth hormons which is appearently common in the US film industry when it gets to getting people in shape for action movies.'"

Most importantly, Alan concludes: "There is no evidence of any drug use by Gatlin or any athlete in Mitchell’s camp."

He then quotes a concluding par from The Daily Telegraph report: "Although there is no evidence that the sprinter is currently using any banned substances to enhance his performance, Wagner’s claims and his association with him and Mitchell is likely to lead to questions about his judgment".

Alan then questions the paper’s own judgement.

So has The Daily Telegraph over-hyped this story in an effort to justify its expense and time commitment?

Well, as it carefully makes clear itself, there is no evidence of doping abuse by Gatlin, who immediately responded on Twitter: "I am not using and have not used PED’s."

No one can deny, however, that The Daily Telegraph reporters have uncovered some responses that make for very queasy reading by anyone who loves track and field.

Wagner may not have been Gatlin’s main agent, but he had acted on the athlete’s behalf on previous occasions and clearly knew Nehemiah well. So he’s not exactly a stranger to Gatlin. It’s not like The Daily Telegraph reporters accidently got talking to the high school janitor.

And to judge by the November 21 email contents aired on 3wiresports, Wagner was being more than a little economical with the truth about the extent of his comments.

This phrase reverberates: "Obviously I played along and told them what they want to hear…"

Was it simply because he wanted to secure the fee supposedly suggested? He has subsequently said: "I had to get them hooked."

Well, no one can deny that Wagner talked a very good game, even down to the demonstrations of how he would inject himself in the abdomen with human growth hormone because of its youth-enhancing properties.

But it couldn’t be all talk, could it? Because in order to secure the fee the goods would have to be delivered, as promised.

And even so far as the talk was concerned – why bring Gatlin or Mitchell into it? That wasn’t necessary. 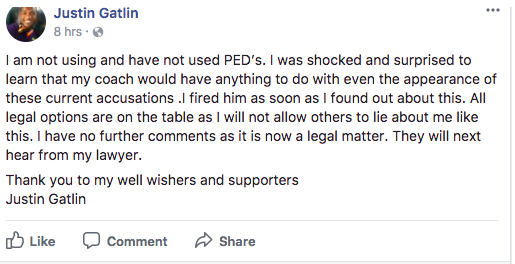 Here’s another rather large and important question. If this episode was nothing more than a newspaper try-on, why did Gatlin immediately sack Mitchell as his coach? Why didn’t he back him? After all, he had hired Mitchell knowing full well that he had previously been convicted of a doping offence - just as the USTAF did when it hired Mitchell as a sprint relay coach in 2014.

"Big picture: fundamentally what would seem at issue is a tension between - to generalize - two different worldviews. On the one hand, there is the British take: once a cheat, always a cheat. Then there is the American story: redemption truly is possible, and a person really can pledge to be a clean athlete and live up to that ideal."

Or has Gatlin suddenly stopped believing in the American story?

Would it be absurd to wish that Wagner and Mitchell – and in consultation, Nehemiah - could have responded to this (bogus) request as did Colin Jackson, the Briton (sorry Alan, but there it is) who still holds the world 60m hurdles world record and was for some years a client of Wagner’s?

According to The Daily Telegraph, the double world 110m hurdles champion (and let’s never forget, Strictly Come Dancing runner-up) told their undercover reporter that it would be "unethical" to give drugs to an actor training for a film.

During a meeting set up by Wagner in Amsterdam, Jackson said he would offer to dissuade his former agent from administering controversial substances, saying, "I’ve still got that athletics conscience on my brain."

Jackson added: "For me, on a personal level, it doesn’t make me feel great, because during my career I never used anything like that.

"And, you know, I kind of look after some young people as well, and I would never advise them to do that. I always think hard work and graft is always the way, there’s no shortcuts. I just don’t think it’s needed."

Set to one side Jackson’s 1993 and 1999 world triumphs. Put out of mind his Strictly performance (he was robbed). You can make a strong case for saying this was his finest hour.

And his is a response that gives genuine hope to the sport.