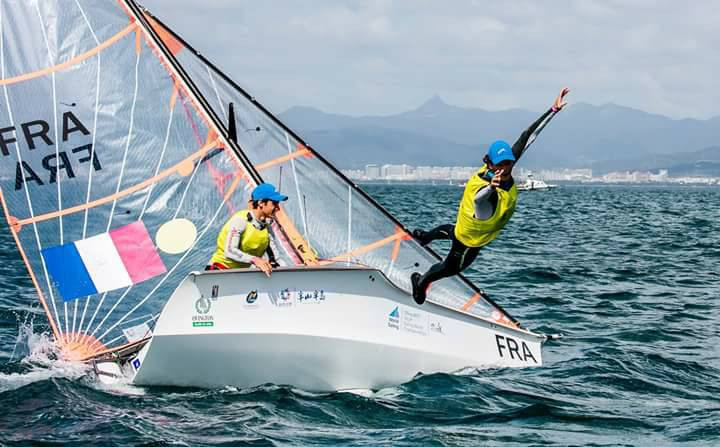 France's Théo Revil and Gautier Guevel came out on top in a three-way fight for the gold medal in the boys' 29er class at the 2017 Youth Sailing World Championships in Sanya.

The French duo, along with Mathias Berthet and Alexander Franks-Penty of Norway and Slovenia's Rok Verderber and Klemen Semelbauer, all had a chance of claiming gold on the final day in the Chinese city following a contest that had swung to and fro throughout the week.

However, it was Revil and Guevel who eventually clinched the title by coming seventh in their race whilst the Norwegians and Slovenians came in 14th and 16th respectively.

Following his team’s victory, Revil said: "We are really, really happy, this is a big honour.

"There was a lot of emotion at the finish line and all the pressure of the week just left us.

"We were so excited.

"We saw our coach straight away but we'll phone our parents next."

Berthet and Franks-Penty took the silver, but it was heartbreak for Slovene pair Verderber and Semelbauer as they were overtaken by Santiago Duncan and Elias Dalli of Argentina, who sealed bronze.

Italian pair Margherita Porro and Sofia Leoni had already secured the gold in the girls' 29er event after yesterday's racing, but today saw Russia’s Zoya Novikova and Diana Sabirova take silver ahead of Australia's Jasmin May Galbraith and Chloe Fisher, who finished third.

The boys' 420 was won by Australian duo Otto Henry and Rome Featherstone, who overcame Thomas Rice and Trevor Bornarth of the United States, despite being a point behind at the start of the final race.

The Australians came third in the final race to take the overall gold with the US duo coming 11th.

Henry explained how his team got off to a difficult start but managed to pull through to claim the gold.

"We knew we had to beat the Americans and come ninth or better," he said.

"We knew we had to get a good result, but it didn't quite go to plan as we stuffed up the start.

"We were jammed in between the start boat and the French and then we couldn't go anywhere so we hit them.

"We had to do two penalty spins but we stuck to our plan and came back from there.

"It worked out well in the end."

Ido Bilik and Noam Homri from Israel completed the podium line up.

American twin sisters Carmen and Emma Cowles took gold in the girls' 420 in style as they won the final race of the competition to seal their title.

This final win put them 26 points ahead of France's Violette Dorange and Camille Orion who claimed silver while Arianna Pasamonti and Giulia Fava of Italy took bronze.

The boys' RS:X went right to the wire with Israel's Yoav Cohen claiming the gold medal over China's Hao Chen by just a single point.

Sil Hoekstra of The Netherlands completed the podium.

The girls' event was also a close contest with Britain's Emma Wilson and Italy's Giorgio Speciale finishing joint top of the overall leaderboard with 24 points each.

However, Wilson’s victory in the final race of the day means that she defends the title she won in 2016.

The Israeli had been trailing Russia's Daniil Krutskikh by nine points overnight.

The Russian, however, could only finish 19th in the final race, meaning Hrosh's fourth place finish handed him the title and pushed Krutskikh down into the silver medal place.

Hrosh said he did not expect to win coming into the final day of racing.

"When I came in this morning, I felt like I needed to save my second place," he said.

"But, at the start, I wanted to take gold and I gave it everything.

"I cannot believe this has happened and I've won."

Charlotte Rose of the US came out on top in the women's laser radial, beating last year's champion Dolores Moreira Fraschini of Uruguay in a close contest.

The two sailors were tied by the end of the final race but Rose's victory in an earlier event meant she won via countback.

The Narca 15 was also a tense affair, but it was Switzerland's Max Wallenberg and Amanda Bjork-Anastassov who claimed gold with victory over Australia's Shannon and Jayden Dalton, again via countback.

The two teams were tied on 57 points after the final race but the Swiss team's victory in the fifth race of the series meant they took the title home.

Italy's consistent performances across all classes this week means they win their fourth Nations’ Trophy.