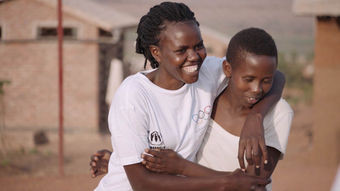 The Olympic Refuge Foundation Board have met for the first time in Lausanne to hold discussions on their pilot projects for 2018.

The pair officially launched the Foundation at the IOC Session in Lima during September, with the organisation's purpose to help support projects across the world.

This is part of a bid to create safe, basic and accessible sports facilities for vulnerable people.

It is hoped this will develop sporting activities for refugees to take part in, while sport can also be used as a pathway to social, physical and emotional well-being.

The Foundation said the projects will take a "community based" approach.

The Board was completed by South Sudanese athlete Yiech Pur Biel, a member of the inaugural Refugee Olympic Team at Rio 2016 which ultimately helped spawn the foundation.

It is claimed the Board features a group of individuals "who share the belief in the power of sport to make the world a better place".

They are all said to have demonstrated these credentials through their interest and experience.

A motion for IOC Honorary President Jacques Rogge to be appointed as honorary member was approved at the first meeting.

The Belgian formerly served as a Special Envoy of the UN Secretary General for Youth Refugees and Sport, with the Foundation praising his efforts to advocate the benefits that sport can bring to young refugees.

This includes supporting the implementation of sports programmes in Jordan, Ethiopia, Colombia and Rwanda.

The meeting was claimed to have approved the operational framework and scope of activities for the Foundation, which is now expected to lead to projects being rolled out at the start of next year.

In collaboration with UNHCR, the Foundation is expected to start work on delivering safe spaces for sport, supported by relevant international partners and local authorities.

The Foundation already has pledges of financial support from the QOC and the Government of Liechtenstein.

As part of the initiative, the Foundation will create tools, policies and resources that will contribute to delivering "effective" programmes.

It will aim to use the Olympic Movement's network in order to advocate the adoption of policies related to the potential of sport as an agent for change.

The Foundation claim that 65 million refugees and internally displaced people worldwide have been forced to flee their homes because of war or persecution.

It is hoped that through the Foundation, the refugees will be able to play sport in a safe environment and increase the understanding of sport as a positive factor for protecting and supporting vulnerable people.