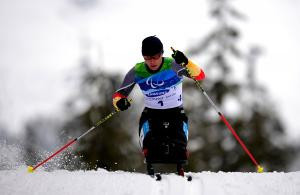 Germany’s Andrea Eskau won the women’s sitting middle distance title on day two of the World Para Nordic Skiing World Cup in Canmore, Canada, to make it two golds in two days after her sprint victory on day one.

The German, a gold medallist at the 2014 Winter Olympics in Sochi, finished ahead of Oksana Masters of the US for the second day running with neutral athlete Marta Zainullina taking bronze.

Eskau won the race by five seconds, after taking advantage of Masters' disqualification yesterday for a false start.

“Yesterday I won by luck.

Despite the fact she has now failed to win either of the season’s opening races, Masters was also satisfied with her result.

“I feel like I’m in a pretty good place, considering this is only the second race of the season,” Masters said.

Referring to yesterday’s disqualification, Masters added: “My goal was to start well over my time.

“I nailed that by a few seconds.

“I raced my own race.

"I know I’m not there yet with my fitness but I feel very happy with where I’m at.”

Masters is one of the favourites for the sit ski races at next year’s Winter Olympics in Pyeongchang and insists that her focus is on that rather than this World Cup.

“I look at the Paralympics as the main war,” Masters said.

“These are the tiny battles.

Daviet, however, is keen to manage expectations going into the rest of the season.

“Will I celebrate? Not yet," he said.

“The season is long.

“This is a perfect start and I am in good shape.

"I feel the altitude in Canmore, but we have to manage our strength.”

The final place on the podium was taken by neutral athlete Alexander Pronkov.

Outside of those two events, the rest of the day was once again dominated by neutral athletes with Ivan Golubkov and Alexander Davidovich taking the top two places in the men’s middle sitting.

Zhang Peng of China won bronze, his first medal at a major competition.

The men’s middle visually impaired race was won by Stanislav Chokhlaev, who finished 20 seconds ahead of Sweden's Zebastian Modin.

Alexander Artemov made up the top three.

Ekaterina Rumyantseva and Anna Milenina won gold and silver in the standing whilst Mikhalina Lysova and Elena Remizova were the top two finishers in the visually impaired category.