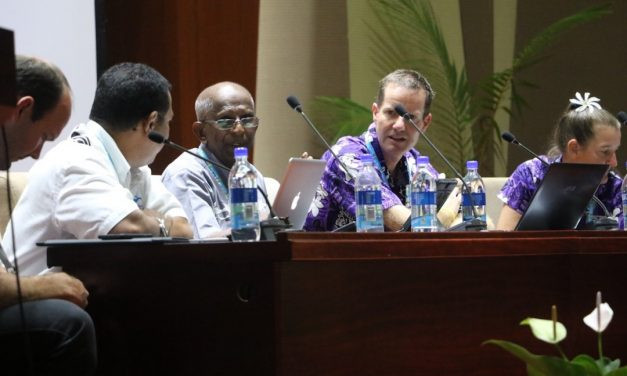 Tahiti has been suspended as a member of the Pacific Games Council (PGC) for "political interference" after the Government boycotted the Pacific Mini Games in Vanuatu.

The unanimous decision was made during the PGC Annual General Assembly, held as part of the Pacific Mini Games in Port Vila.

The country's suspension will officially come into effect following the Closing Ceremony of the Games on Friday (December 15).

It will remain in place "until the PGC Executive Board is convinced that this political interference has ceased", the PGC said in a statement.

"The General Assembly of the PGC unanimously agreed to suspend the membership of the Tahiti Nui Pacific Games Association (COPF) due to the French Polynesian Government’s interference in the autonomy and independence of sporting associations, which calumniated in its decision to boycott the Vanuatu 2017 Pacific Mini Games," the statement read.

There has been row between the PGC and the Tahiti Government over who should represent the country's boxers at the event following claims that they were being endorsed by a rival federation.

The dispute led to the Tahiti Government refusing to send a full delegation to the Games.

It means athletes will be forced to take part as neutrals.

Boxers from the nation are set to compete later this week, although they will do so under the PGC flag.

Tahiti was also due to send a rugby sevens team but they withdrew at short notice.

It follows a decision from a local court to annul the results of the COPF elections last year.

The PGC then confirmed they would only accept entries from national governing bodies in the country recognised by their respective International Federations.

The organisation had earlier warned in a statement that they would not entertain the prospect of unsanctioned athletes competing at the Mini Games.

Hosts Vanuatu enjoyed a good day on the track as action resumed at the Pacific Mini Games.

The Pacific Mini Games is due to continue tomorrow.