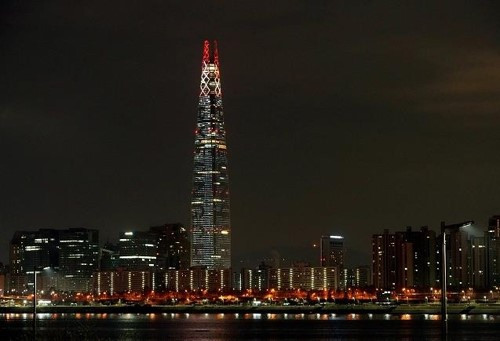 South Korea's tallest building, the Lotte World Tower, is displaying an Olympic Torch in Light Emitting Diode (LED) form until the end of Pyeongchang 2018 in March.

The LED was unveiled in a ceremony attended by Organising Committee President Lee Hee-beom and Lotte Group chairmain Shin Dong-bin.

It marks a latest attempt to raise the profile of the event with less than two months to go until the Olympic Opening Ceremony is due to take place on February 9.

The Lotte World Tower is a 23 floor 554.5 metre skyscraper in the Jamsil district of Eastern Seoul which opened to the public on April 3 this year.

It is currently the fifth tallest building in the world.

Concerns still remain over the profile of the Olympic and Paralympic Games in the host country.

It is now claimed that 55 per cent of tickets have been sold for the event but the pre-Opening Ceremony target of 90 per cent remains a long way off.

The Olympic Torch Relay is continuing its journey around the host nation in another bid to mobilise the entire nation and improve publicity.

Decorating iconic buildings with Olympic memorabilia has been an increasingly popularly strategy for Olympic bidding and host cities this year.

Paris 2024 lit up the Eiffel Tower with their "Made for Sharing" slogan - controversially written in English - in February.