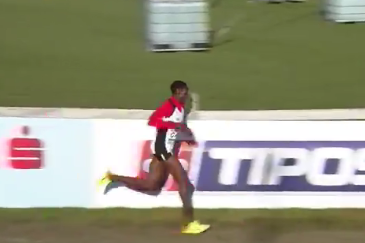 Yasemin Can, who never competed professionally for Kenya when called Vivian Jemutai before switching name and nationality in 2016, became just the second women to win successive titles after repeating the feat achieved by Ireland's Fionnuala McCormack in 2012.

She romped to victory over 8.2 kilometres today at the X-Bionic Sphere in 26min 48sec.

McCormack finished 12th today in 27:45 in her record 15th appearance at the event.

"It was not easy race as it is very windy and cold here," said Can afterwards.

"The wind was pushing me back.

"However, I like to keep in my own rhythm - to slow down and speed up whenever I want, so I did not mind I had to to run on my own.

"Tomorrow I will have my 21st birthday so I am happy I gave myself this gold medal present."

The first ever senior mixed relay gold medallists at these championships #Samorin2017 pic.twitter.com/XKMa93blqd

Romania took the silvere medals with 31 points and Turkey took the bronze with 54.

Kaan Kigen Özbilen made it a Turkish double when winning the 10.2km men's race in 29:45.

Özbilen, who claimed two African Championships silver medals in the 5,000 and 10,000 metres for Kenya under the name Mike Kipruto Kigen in 2006, switched nationality in 2015.

Adel Mechaal of Spain took the silver medal in 29:54 and Britain's Andrew Butchart crossed a further six seconds back for bronze.

Spain placed second with 20 and Britain third with 35.

Britain did triumph in the inaugural mixed relay event.

Czech Republic finished one second behind for silver with Spain a further second back in third.