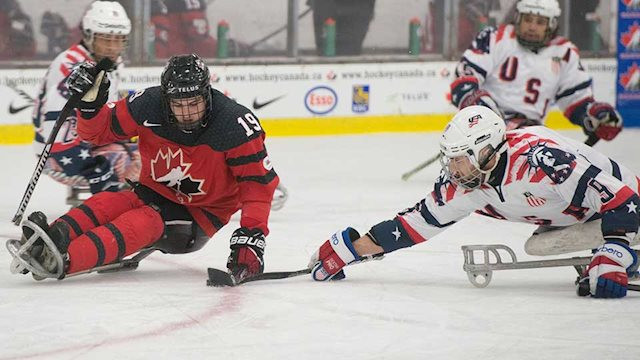 United States secured top spot in the pool phase of competition at the World Sledge Hockey Challenge in Charlottetown by beating hosts Canada.

Both countries headed into the tie at the MacLauchlan Arena with 100 per cent records, having already beaten Italy and South Korea.

The US had not been beaten in the round-robin for three years at the tournament and looked on course to extend the record when Brody Roybal opened the scoring.

Declan Farmer put them 2-0 up with six minutes played, but a power play strike from Billy Bridges put Canada back in contention at the end of the opening period.

Bridges pulled his side level with a second period penalty but it proved only a temporary respite as Josh Misiewicz put the Americans back in front.

Goals from Kevin McKee and Roybal in the final period rounded off the scoring, as the US emerged as 5-2 winners.

Defeat meant Canada would end second in the standings, setting up a semi-final clash with third place South Korea who saw off Italy.

Goals from Gianluca Cavaliere and Florian Planker had put Italy on track to earn their first win, but South Korea stormed back as the match progressed.

Seung Hwan Jung struck in the second period, before Young Sung Kim rewarded their spell of pressure by equalising.

A goalless third period resulted in both teams going head-to-head in a shoot-out, with Si Woo Choi scoring the winner after eight efforts apiece.

Both semi-final matches will take place tomorrow, with group winners the US taking on winless Italy.

Canada will face South Korea, who are building towards a home Paralympic Games in Pyeongchang next year.