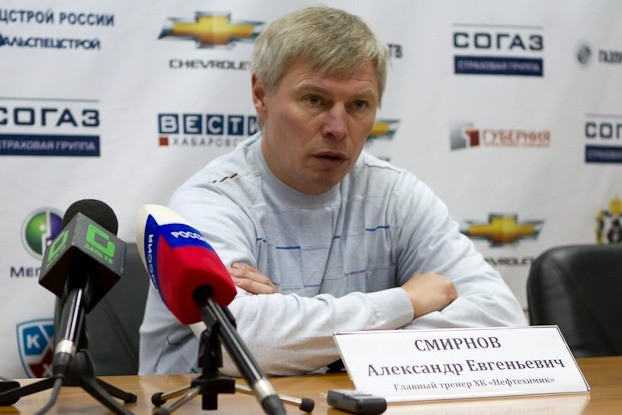 Former Russian ice hockey captain Alexander Smirnov has claimed Norwegian skiers who suffer from asthma should compete in the Paralympic rather than the Olympic Games in a latest attempt to detract from his country's doping problems.

Smirnov, captain of Russian team at the 1994 Olympics in LIllehammer and who is now the coach of Kontinental Hockey League (KHL) side Kazan Ak Bars, claimed to be "surprised" that the International Olympic Committee (IOC) are focusing on Russian doping problems rather than those from other countries.

The IOC are expected to make a decision next Tuesday (December 5) on Russian participation at Sochi 2014 based on the outcome of their two investigations into Russian doping problems.

"It's hard for me to explain what's going on, it can be connected with politics, but if you dig deeper, athletes from other countries also take dope, and the IOC chases only the Russian team," Smirnov told R-Sport.

"If you take the same Norwegian skiers, biathletes, then they are all asthmatics, and everyone knows this very well.

"By and large, if they are asthmatics, if they are sick, then they need to participate in the Paralympic Games."

Smirnov played for nine seasons in Norway, representing Storhamar Dragons, and later coached the team to the Norwegian Cup.

"It's unpleasant that such a persecution of Russian sports is going on, even our President Vladimir Putin said that after the Sochi Olympics all the tests were taken and there were no violations, but suddenly three years later there were problems," he said.

"Any person understands that something is wrong here."

Norwegian cross-country skier Martin Johnsrud Sundby was stripped of the overall World Cup and Tour de Ski titles he claimed in the 2014-2015 season after failing a test for exceeding permitted levels of asthma medication salbutamol, although he was only banned for two months during the summer off-season.

Athletes who suffer from asthma can also apply for therepeutic use exemptions to take substances that they would otherwise be barred from taking.

It has been reported in Norwegian media, including VG, that as many as 42 Olympic medallists from the country since 1992 may also have benefited from asthma medication.

This claim was based on statistical data rather than proof, however, and actual evidence of Norwegian doping is very minimal when compared with the claims of Russian drug use and sample tampering at Sochi 2014.

The first two of them - Alexander Legkov and Maxim Vylegzhanin - were each retrospectively disqualified by the IOC last week for supposedly tampering with urine samples, but they deny all allegations and are planning to appeal to the Court of Arbitration for Sport.

In total, 25 Russians have so far been disqualified in five sports.

This does not yet include any in Smirnov's sport of ice hockey, although seven unnamed Russian female players are under investigation.

Two of the seven are accused of submitting samples showing readings that were allegedly physically impossible to be held by a woman.

The International Ice Hockey Federation (IIHF) has declared its support for Russia competing at Pyeongchang 2018 despite these allegations, however, and criticised the IOC for putting the sport "at risk".

In a statement following a meeting of its ruling Council, the IIHF said they "oppose the collective punishment" in the case of Russian athletes following suggestions the entire country could be banned from or made to compete neutrally at Pyeongchang 2018.

They added that the extent to which the IOC is pursuing "punitive measures" in dealing with Russia's doping scandal is "putting the health of ice hockey at risk".

KHL President Dmitry Chernyshenko, the former President and chief executive of Sochi 2014, has also accused the IOC of "destroying the existing sports world order" by considering threatening Russia with neutral participation at Pyeongchang 2018.

Chernyshenko added that the KHL is "ready to respond accordingly" if such a plan goes ahead in what was interpreted as a threat to prevent international players from being released to participate.