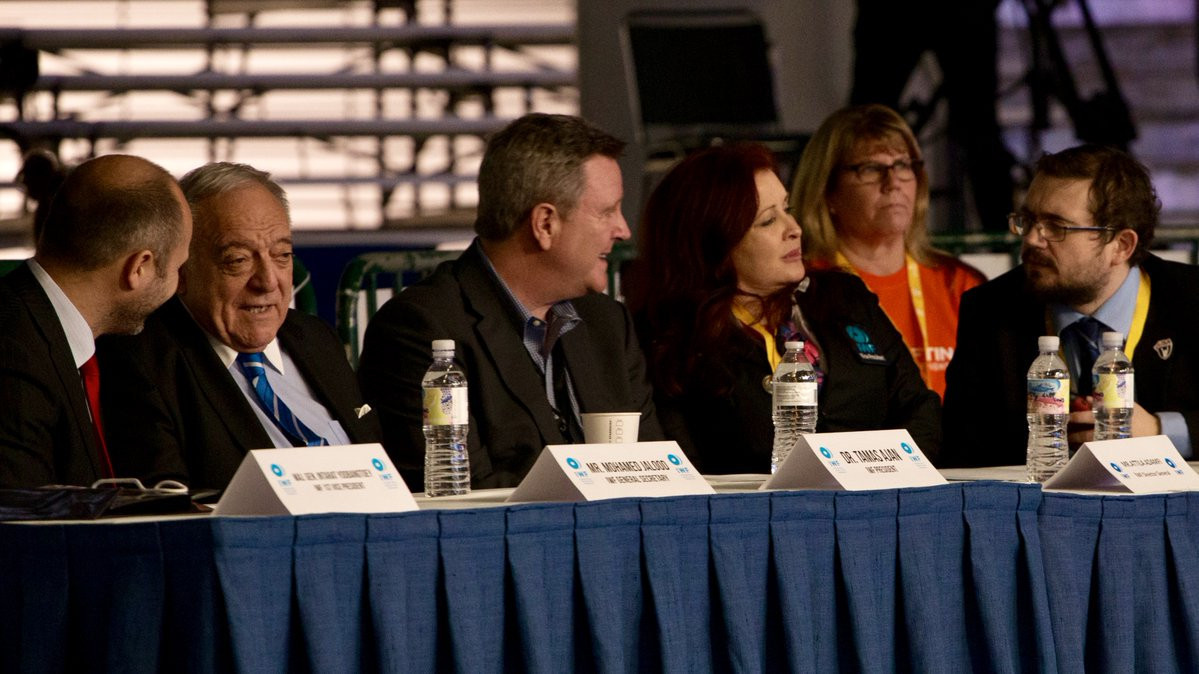 United States Olympic Committee (USOC) chief executive Scott Blackmun believes the International Weightlifting Federation (IWF) has shown "real mettle" in terms of the decisions it has made in aiming to preserve the sport’s Olympic status.

Blackmun was speaking to insidethegames during a visit here to the 2017 IWF World Championships, which are being held in the United States for the second consecutive edition following Houston’s hosting of the 2015 event.

He was a spectator for the women’s 63 kilograms B group session, sat alongside IWF President Tamás Aján and USA Weightlifting head Ursula Garza Papandrea.

The threat of weightlifting being dropped from the Olympic programme follows a series of doping scandals, most notably 24 positives at the 2015 World Championships and 49 positives in the re-testing of samples from the Beijing 2008 and London 2012 Olympic Games.

On Saturday (November 25), the IWF Executive Board unanimously approved recommendations made by the Clean Sport and Sports Programme Commissions.

They will form the basis of an IWF submission to the IOC, which is set to hold its next Executive Board meeting in Lausanne on December 5 and 6.

"The director general briefed me on the changes they are making and I know that they’ve been in communication with the IOC about their programme to enhance anti-doping measures and it sounds like the IOC is responding favourably, but it’s a sprint, it’s not a marathon," Blackmun told insidethegames.

"I think from what I see, I’m encouraged, but obviously there is no room for compromise in this area and so that’s going to be the real test.

"They’ve shown some real mettle in making the decisions they’ve made but they need to continue to show mettle going forward."

Blackmun was full of praise for the organisation of the World Championships, which will see more than half of the 377 weightlifters drug tested.

"It’s special whenever the US is able to host a World Championship event and so we want to be supportive of our nationals federations, and obviously of the IWF by being here," he added.

"So I just wanted to come and work with Phil and his team and Tamás and in terms of the event itself, it looks like a very well-produced event.

"They have a lot of athletes here, especially when you compare it to 2013, which was after the Olympic Games before, so it seems like it’s a great success.

"They’re very passionate about their sport and very focused on making sure that it’s clean and that’s reassuring."

Also representing the USOC here today was President Larry Probst, who met with the IWF Executive Board.

The independent Clean Sport Commission has held a number of meetings this year and, following an extensive analysis of the anti-doping efforts in weightlifting over the last 10 years, presented what the IWF describes as its "innovative and pioneering" recommendations to the IWF Executive Board here.

The Commission determined that while significant improvements have been made in the IWF weightlifting programme since London 2012, there is scope to do a lot more work to combat doping.

Among the others is the implementation of new rules in the IWF Anti-Doping Policy to send a clear deterrent message to countries that if they do not fulfil their anti-doping responsibilities to ensure that their athletes are clean, they will lose their right to participate in international competition for a period up to four years.

The latest instalment of the WADA legacy outreach programme is being delivered at the event here, showcasing a bid to raise awareness and promote clean sport to a generation of athletes.