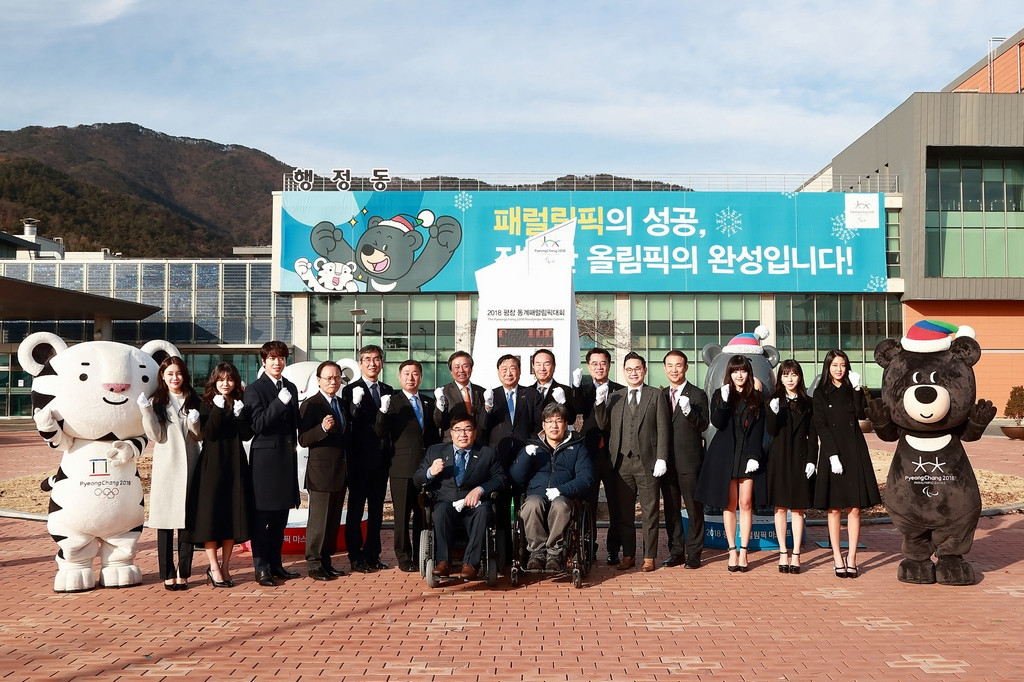 Pyeongchang 2018 have unveiled a countdown clock to mark the 100 days to go mark until the Winter Paralympic Games.

The clock was revealed at the Korean Paralympic Committee (KPC) Icheon Training Centre, as part of a day of celebrations.

It was installed between mascot sculptures at the front of the centre, where it will remain after the Games.

Pyeongchang 2018 President Lee Hee-beom was among those present at the unveiling, where he was joined by Do Jong-whan, South Korea’s Minister of Culture, Sports, and Tourism.

KPC President Lee Myung-ho was also among the attendees at the event.

A commemorative photo taken at the end of a tour of their training facilities, with attendees spelling out 100 to mark the milestone.

Lee claimed organisers wanted to educate the Korean population about Paralympic sport and urged them to attend the Games.

“The Paralympic Winter Games will be a celebration of sport and culture for all,” the Pyeongchang 2018 President said.

“We want to encourage everyone to come and watch these amazing athletes in action next March.

"We aim to be the most accessible Games ever, and we want to educate Koreans on Paralympic sports so that we can open new horizons and provide opportunities for everyone to get involved in Paralympic sports before, during and after the Games.

“With the legacy of our state-of-the-art venues, people will be able to experience first-hand the thrill of having fun on the snow and ice, regardless of their age and ability.”

Pyeongchang 2018 confirmed on Monday (November 27) they had only sold five per cent of the sales target for the Paralympic Games.

Parsons has expressed his confidence in the work done by organisers to deliver a high quality Paralympic Games.

"I am looking forward to a great Games in 100 days from now,” he said.

“I had the opportunity to visit Pyeongchang for the first time recently and I am excited by the work that is being done to deliver the Games.

“I would like to invite the Korean people and fans from around the world to come and watch the Paralympic Winter Games, to experience the transformation that the Paralympic Movement can bring to a city, a country and the whole society.

“And, of course, to have a once in a lifetime experience watching the world's best athletes in action."

An arts festival is set to take place in Seoul tomorrow to continue with the promotion of the Paralympics, with the event being stage by the Federation of Disability Culture and Arts Association of Korea.

The festival will feature performers from South Korea, China and Japan, with coverage broadcast on KBS television.

Over 1,000 people are expected to be involved, including Ambassadors of China and Japan.

The Paralympic Games are due to take place from March 9 to 18.