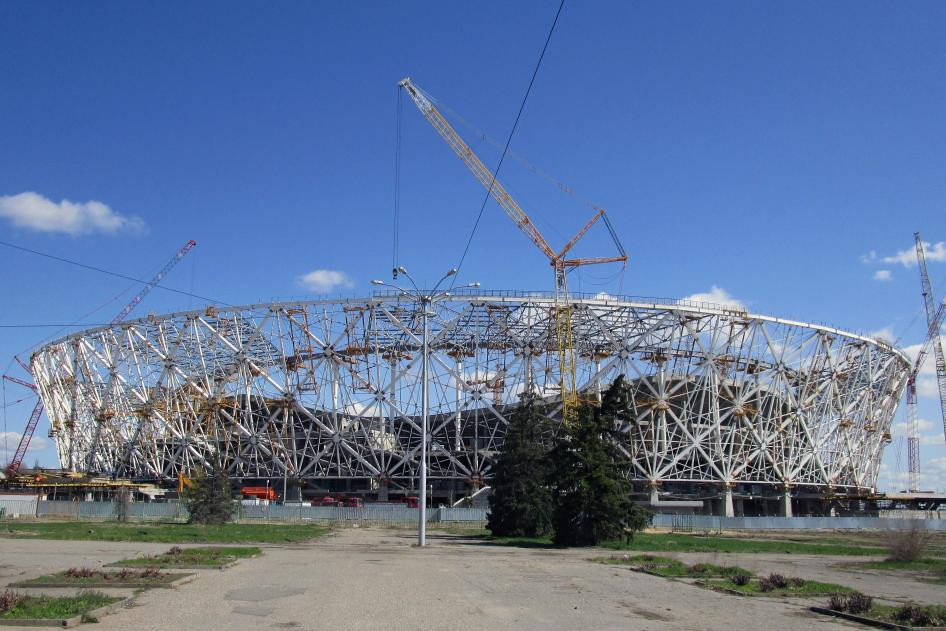 Workers at construction sites for the 2018 World Cup in Russia are facing an escalated risk of human rights abuse due to tight deadlines, a campaign group has warned.

Human Rights Watch (HRW) also stepped up their criticism of FIFA after the organisation claimed the worldwide governing body had still not done enough to address human rights abuses.

It comes after FIFA published a report from their Human Rights Advisory Board, which urged them to strengthen efforts to assist workers' rights at Russia 2018 and Qatar 2022 World Cup construction sites.

HRW claim, however, that FIFA's publications on the issue are "piling up but the human rights progress is not".

In a statement released prior to the 200 days to go milestone until the 2018 World Cup begins in Russia, which falls on Sunday (November 26), HRW sent a warning to FIFA and said fans should "not have to sit in stadiums that workers were enslaved or even died to build".

"With construction in Russia entering the crucial final phases, the risk is that danger to workers will escalate with companies taking hazardous shortcuts or forcing workers to work around the clock to meet the fast approaching deadline of the Opening Ceremony," HRW said.

"With the clock ticking, FIFA needs to move beyond reports, and take concrete steps to make things right."

The first report from FIFA's Human Rights Advisory Board, released earlier this month, also called on the global governing body to provide more detail about the monitoring it does at building sites for venues due to be used at the two editions of their flagship competition.

Treatment over workers in Russia and Qatar has been one of the main concerns leading up to the two tournaments.

The panel, which includes representatives from the United Nations, trade unions and sponsors, made a total of 33 human rights recommendations to FIFA in the report.

Simonov, who documented more than 700 cases of abuse against migrant workers involved in the construction for the Sochi 2014 Winter Olympic Games, has attended a court hearing in Russia after he claimed he was illegally detained in 2018 World Cup host city Volgograd in April while attempting to speak to workers on the stadium construction site.

Simonov claimed police detained him as soon as he arrived at the venue and tried to search his phone and camera, questioned him about his work and threatened him by saying they had information that he was involved in crimes.