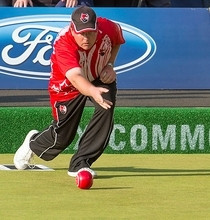 A total of 10 athletes have been nominated by Bowls Canada to represent the country at next year's Commonwealth Games in Gold Coast.

The squad, which includes five women and five men, are set to compete for Canada in the bowls events at the Games in the Australian city, which run from April 4 to 15.

Chris Stadnyk has been nominated to make his fourth appearance at the Games for Canada, while Leanne Chinery is set for her third Commonwealth Games.

Jacqueline Foster and Kelly McKerihen are the other two veterans in the squad, which Bowls Canada claim is a good blend of rookies and experienced campaigners.

"Canada is ranked third in lawn bowls over the history of the sport at the Commonwealth Games,” said Claire Carver-Dias, Canada’s Chef de Mission.

"We know that they will be competitive at the Gold Coast Games.

"Ryan Bester’s silver medal at the Glasgow 2014 Games was a great performance, and we can be sure that he will be aiming for the top of the podium next April."

Terry Scott, head coach of the Canadian bowls team, said he was looking forward to working with the athletes in the build-up to and during the Games.

"The Canadian Bowls team has proved in the past to be a competitive unit at the international level," he said.

"The mission for this side is to uphold that tradition and show once again that they can be successful on the international stage.

"It is a pleasure to be associated with a team of both rookies and veterans that is so committed to achieving podium results."

The entire Canadian team will be officially announced by Commonwealth Games Canada in March 2018.