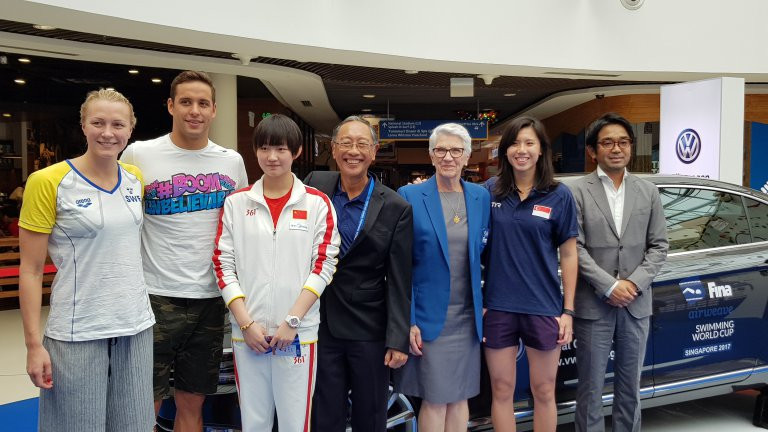 South Africa's Chad Le Clos and Sarah Sjöström of Sweden will bid to wrap up the overall men's and women's titles respectively during the last leg of the International Swimming Federation (FINA) World Cup in Singapore.

Le Clos and Sjöström both come into the final event of the season with healthy leads and are favourites to clinch overall glory at the two-day event at the OCBC Aquatics Centre.

The duo, who also lead the standings for the third cluster of competitions on the World Cup circuit, each stand to receive $150,000 (£114,000/€127,000) as a result of a prize increase announced by FINA earlier this year.

The event in Singapore, which marks the conclusion of the eight-leg World Cup series, begins tomorrow and concludes on Sunday (November 19).

Le Clos, a four-time Olympic medallist, leads the men's standings with a total of 402 points, 129 in front of nearest challenger Vladimir Morozov of Russia.

"I’m really excited to be back here for a seventh time now," the South African said.

"I had my big break here in the Youth Olympic Games in 2010, which helped me go on to Olympic success two years later, so Singapore always has a special place in my heart."

Sjöström, who won three gold medals at July's World Championships in Budapest, is also likely to secure the overall title as she sits top of the women's leaderboard on 578 points.

Three-time Olympic champion Katinka Hosszú of Hungary is still hoping to usurp the Swede at the summit of the standings but trails by 132 points.

"I was in better shape straight after Budapest so I just tried to keep it going," said Sjöström.

"It’s the first time I’ve done the whole World Cup circuit so I’m excited to be at the last leg in Singapore."