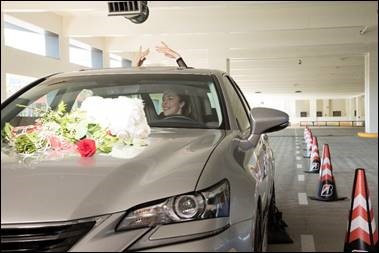 Bridgestone Americas have launched a marketing campaign with a series of featured athletes to celebrate the idea of "Clutch Performance".

The campaign includes "Team Bridgestone" athletes, with five members of the United States’ team having been confirmed in June.

Having debuted last month, the advert will continue running through Pyeongchang 2018, with the promotion helping to highlight Bridgestone’s ultra-high performance, all-season Potenza tires.

The company, who joined The Olympic Partner (TOP) scheme in 2014, claim the tires are engineered for drivers who want the most out of their sports car or performance vehicle.

"Ashley Wagner is one of the world’s best figure skaters, famous for her precision, accuracy and gripping performances on the ice," Philip Dobbs, chief marketing officer of Bridgestone Americas tire operations, said.

"She knows what it means to perform when it matters most, making her the perfect athlete to help us prove how Bridgestone Potenza tires are engineered to come through in the clutch.

"It’s one thing to give your best performance one time, but it’s another thing entirely to be able to do it day in and day out under intense pressure.

"That’s what Olympians do when they perform on the world’s biggest stages, and it’s something we’ve engineered our tires to deliver for over 80 years.

"We’re excited that our new campaign, and our full activation strategy for Pyeongchang 2018, brings this idea to life."

They will also feature in a digital brand experience on the Bridgestone website, as well as a campaign extension that showcases "Clutch Performance".

"It was really fun to film this commercial with Bridgestone and experience the performance of Bridgestone Potenza tires first hand," Wagner said.

"Figure skating is incredibly technical and all about performance under pressure, so I’m proud to be a part of Team Bridgestone and work with a company that not only supports the Olympic Movement and its athletes, but truly understands performance at the highest level."

Bridgstone’s athletes will be featured throughout the company’s dealer and retail store networks on promotional materials designed to engage consumers through the upcoming Winter Olympics.

Wagner also are due to headline a retail-based promotion launching in December that offers fans a chance to meet a member of Team Bridgestone.