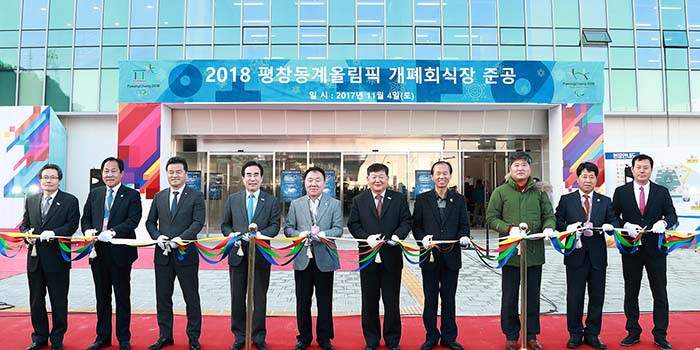 Construction of the venues to be used for next year's Winter Olympic and Paralympic Games in Pyeongchang is 99.7 per cent complete, South Korean officials have claimed.

A ceremony to mark the occasion was held at the venue for Opening and Closing Ceremonies at Daegwallyeong-myeon, Pyeongchang-gun county, in Gangwon-do province.

The attendance included the Second Vice-Minister of Culture, Sports and Tourism Roh Tae-kang and Governor Choi Moon-soon of Gangwon-do Province.

"The Alpensia Sliding Center, among others, has been built with the use of state-of-the-art technologies, like mechanisation and automation.

"The sliding track, which usually takes at least 30 months to construct, has been built in just 12 months.”

The Gangneung Oval, due to host the speed skating, has become South Korea's largest-ever structure in scale, with a total floor area of 37,864 square metres.

The Gangneung Ice Arena for figure skating and short-track speed skating is equipped with an automated ice-making system that makes the ice as even as possible.

The stadium also runs a temperature control system that maintains the temperature in the stands at 15 Celsius degrees and at 40 per cent humidity.