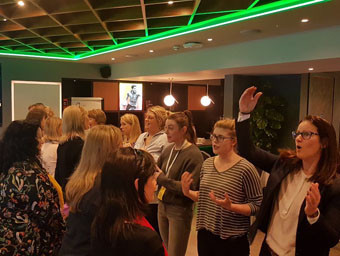 The Olympic Council of Ireland (OCI) hosted a two-day conference on "Empowering Women" which was attended by representatives of various Irish sports federations, delegates from Sport Ireland and the Irish Institute of Sport.

The conference, which was held at Dublin's Croke Park, the headquarters of the Gaelic Athletic Association, was addressed by OCI President Sarah Keane and Executive Board member Georgina Drumm, who is President of Athletics Ireland, and who reported on the recent Women in Sport Forum she attended in the Lithuanian capital, Vilnius.

Gabriela Müller, a Swiss communications coach, ran the Croke Park conference, which covered such issues as leadership styles, involvement of women in sport, building self-awareness as leaders, and self-confidence skills.

Women's involvement in Irish sport has recently enjoyed a number of successes, with the hosting of the Women's Rugby World Cup in Dublin and Belfast and victories by, among others, boxer Katie Taylor and Annalise Murphy, who won silver in sailing at Rio 2016, Ireland's first sailing medal since Moscow 1980.

That event was, in fact, the highest attended women's sporting event anywhere in the world so far in 2017, eclipsing the 35,271 at Wembley last May for the Women's FA Cup Final, which saw Manchester City defeat Birmingham.

Among the Manchester City players was defender Megan Campbell, originally from Drogheda, on Ireland's east coast.