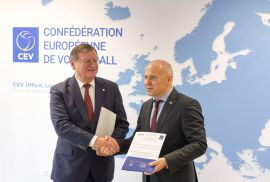 The European University Sports Association (EUSA) has signed a Memorandum of Understanding with the European Volleyball Confederation (CEV) as the two organisations attempt to strengthen cooperation and foster a closer partnership.

EUSA President Adam Roczek was joined by CEV counterpart Aleksandar Boričić at the signing ceremony, which followed a meeting held at CEV headquarters in Luxembourg.

The CEV and EUSA will work together to promote volleyball, beach volleyball and snow volleyball projects and activities among university students.

A continuous exchange of information between both organisations will aim at growing the sport at all levels.

The EUSA will use their competitions as a platform to promote the concept of pursuing a career in volleyball next to earning academic merits.

Both organisations will also strive to expand their cooperation in the near future.

"We look forward to be able to improve the conditions for our athletes through cooperation with CEV," a EUSA statement said.

Volleyball was one of the two sports featured during the inaugural edition of the EUSA-governed European Universities Championships in 2001 and was held in Užice and Vrbas.

EUSA volleyball events have since been organised annually.

The CEV is responsible for governing 56 National Federations in Europe and is recognised as such by the International Volleyball Federation.

The continental governing body has the authority and responsibility for organising European competitions in volleyball, beach volleyball and snow volleyball.

The EUSA is the governing body for university sport and has members in 45 countries.

It is responsible for organisation of events in 20 sports as Championships and for the delivery of the biennial European Universities Games.

The Games, last held in Croatian cities Zagreb and Rijeka in 2016, are described as the largest European multi-sport event for students.

The 2018 and 2020 editions are due to be hosted by Portuguese city Coimbra and Serbia’s capital Belgrade respectively.