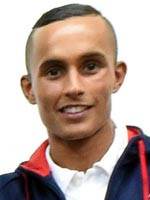 French distance runner Riad Guerfi will serve a four-year ban for doping after the International Association of Athletics Federations (IAAF) won a case at the Court of Arbitration for Sport (CAS).

The two-time national 10,000 metres champion was charged and provisionally suspended by the IAAF in October 2016 due to an "abnormal hematological profile" in his athlete biological passport.

As per IAAF rules, the case was referred to the French Athletics Federation (FFA) for adjudication but the national governing body decided to clear the 30-year-old on a "technicality".

According to Le Monde, Guerfi claimed that he did not receive an e-mail which detailed the proceedings against him.

He said he only learnt about the biological passport claims when reading Le Monde.

The FFA feared that because of this, any appeal by Guerfi would result in his ban being overturned with their verdict lifting the IAAF's suspension.

An appeal to CAS was immediately launched by the IAAF which re-imposed the provisional ban and the Swiss-based court has now sided with the world governing body.

It means Guerfi's four-year sanction can be issued which will keep him out of competition until 2020 after being back-dated.

Ninety-five doping cases have now been brought forward by the IAAF thanks to its biological passport programme.

Today's verdict was welcomed by the Athletics Integrity Unit, the independent body which manages doping matters for the sport.