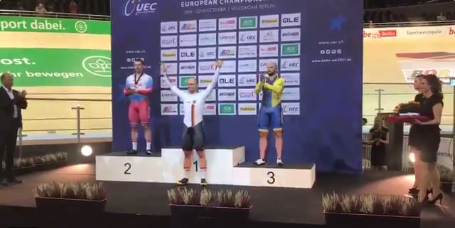 Levy first romped to victory in the men's keirin final in a battle between two former world champions against naturalised Russian Shane Perkins at the Velodrom in the German capital.

The 2009 World Championship winner had enough to hold off Perkins, winner of the world title when riding for Australia in 2011, as Andrei Vynokurov of Ukraine took the bronze medal.

It marked Levy's first gold medal of the week after team sprint silver.

Ten points in the final sprint proved enough to move them ahead of Ireland's Lydia Boylan and Lydia Gurley and claim a winning haul of 58 points.

The Irish pair finished with 50 points for second place as The Netherlands' Amy Pieters and Kirsten Wild won the bronze medal with 46 points.

Florian Maitre and Benjamin Thomas of France won the corresponding men's event in thrilling fashion as their total of 43 proved enough for a one-point win.

Denmark's Niklas Larsen and Casper Pederson had to settle for the silver medal and Poland's Wojciech Pszczolarski and Daniel Staniszewski finished a further two points behind for the bronze.

France finished on top of the overall medals table with five golds, one silver and two bronzes.

Germany won four golds, four silvers and two bronzes for second place and Britain were third with three gold and one silver.