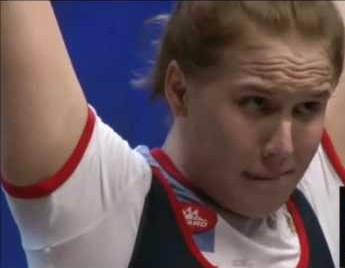 The Ukrainian favourite Hanna Panova thought she had won the gold medal at the European Junior and Under-23 Championships, only to be beaten into second place by Russia’s Alezksandra Kozlova when a refereeing decision overruled her final attempt because of a press-out.

The biggest loser, though, was nowhere to be seen here.

This was the junior women’s 69 kilograms, a category in which the continent’s highest ranked young lifter is the World Junior Championships silver medallist Rebekah Tiler of Britain.

Only Anastassiia Romanova of Russia is ahead of Tiler in the European senior rankings and, if Tiler goes to Anaheim for the International Weightlifting Federation World Championships next month, she will be ranked sixth best of those competing

Britain sent eight athletes to Albania but Tiler, 18 - who would have won had she been anywhere near her best here - stayed at home as the fallout from British Weightlifting’s funding cuts continued.

UK Sport, the body that funds elite athletes with hopes of an Olympic medal, through each sport’s governing body, cut all Tokyo 2020 money for weightlifting a few months after Tiler had finished 10th at Rio 2016 and second in Youth World Championships.

Based on past performances, GB weightlifters were not rated a good investment by UK Sport, which also cut money for badminton, table tennis, fencing, archery and others.

British Weightlifting said in a statement that it was "shocked and devastated" by the news and Tiler took it even harder.

She managed only fourth place in this year’s senior European Championships, then improved in Tokyo in June with that Junior Worlds silver.

But Tiler was faced with the prospect of having to find a job as well as full-time training, and she lost her room at the multi-sport elite performance centre at Loughborough.

Her training was badly disrupted and in July Tiler refused to compete at the British Championships.

"How else am I going to put my point across," said Tiler, who felt let down by British Weightlifting, despite the cuts coming from elsewhere.

"This is so hard - I gave up my childhood for weightlifting," she said in a television interview, before appealing on social media for donations to help her make it to Tokyo.

The stark comparison with other nations here in Albania shows how poor British weightlifters are, in terms of funding.

For example Latvia has an Olympic training camp for 10 to 12 weightlifters and they also hold special preparation training camps before all major championships, as do many others.

British Weightlifting did not wish to comment further on Tiler’s predicament, but an insider in the team said her training had been severely disrupted and added, "It’s such a shame, and it seems likely to have an impact on her achieving her dreams."

Both the winner and runner-up today finished behind Tiler in Tokyo, where she totalled 226kg.

Kozlova, fifth in Tokyo, totalled 212kg ahead of Panova, a bronze medallist in the Junior Worlds, and Spain’s Ilia Hernandez.

There were three other Junior events.

In the men’s 85kg, Davitadze Revaz of Georgia, a Junior World bronze medallist, was an impressive winner with 353kg, the second best Junior total of the year.

Davit Hovhannisyan, of Armenia, was second on 343kg and Ukraine’s Illia Kulikov third on 340kg.

The winner at 94kg was Kyryl Pyrohov of Ukraine, who made his final attempt at 201kg to finish on 376kg, ahead of Yauheni Tsikhantsou of Belarus, and Azerbaijan’s Huseyn Ismayilov.

In the women’s 75kg Sona Poghosyan, of Armenia, waited until her 10 rivals had finished the clean and jerk before coming out to post a total of 227kg, well clear of Russia’s Maria Tretyakova with 204kg and Alona Shevkoplyas 202kg, of Ukraine.