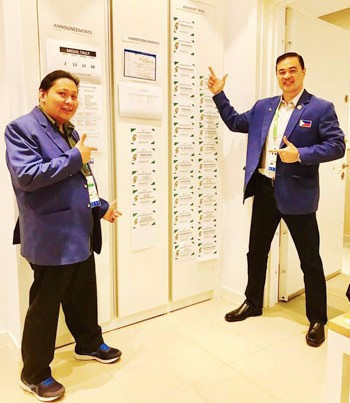 A taekwondo Olympian at Seoul 1988, Del Rosario led the team to 30 medals including two golds, 14 silvers and 14 bronzes as The Philippines finished 19th in the medals table in Ashgabat.

His deputy Chef de Mission in Ashgabat, Raymund Lee I. Reyes, will fulfil the same role in 2019 alongside Robert Bachmann.

Del Rosario, who is also a famous actor, claimed The Philippines needed to prepare for the SEA Games in the same way they did for Ashgabat 2017 with the Philippine Sport Commission, the POC and National Sports Associations working together.

Philippine Sports Commission chairman William Ramirez announced in July that they would not fund the event and would instead divert resources to rebuild regions at the centre of conflict between security forces and affiliated militants of the Islamic State.

The Philippines stepped in to stage the Games in 2015, after Brunei pulled out because they claimed they would not be ready in time.

The Games are expected to feature nearly 4,500 athletes from 11 countries competing in 36 sports.

It has been claimed the country will maximise existing facilities it used when The Philippines last hosted the event in 2005 in capital city Manila.