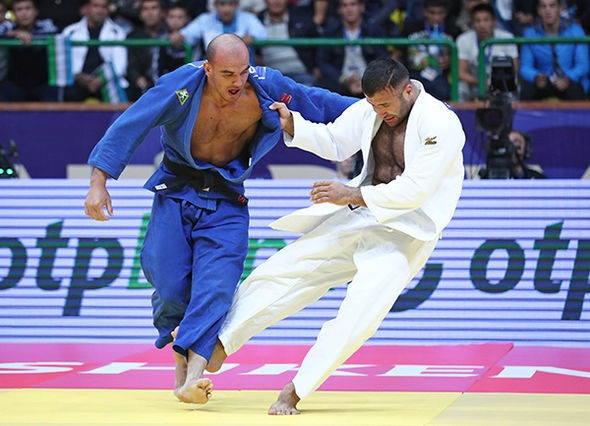 Komronshokh Ustopiriyon of Tajikistan battled past Uzbekistan's Dilshod Choriev to secure the men's under-90 kilograms gold medal in a record-breaking encounter at the International Judo Federation (IJF) Grand Prix in Tashkent.

Ustopiriyon eventually edged his opponent in the 11th minute of the golden score period, an IJF World Tour record, to claim victory at the Uzbekistan Tennis Courts.

The marathon win came after Choriev was given a shido penalty for passivity following a gruelling 10 minutes and 27 seconds of the additional time.

Yahor Varapayeu of Belarus and Yakhyo Imamov of Uzbekistan proved too strong for Uzbekistan's Doston Meyliev and Islam Bozbayev of Kazakhstan in their respective bronze medal contests.

Velensek topped the podium in the women's heavyweight division at a major event for the first time after Issanova received three shido penalties.

The Slovenian, a double World Championships medallist, won her Olympic bronze at last year's Games in Rio de Janeiro at under-78kg and justified her decision to move up a weight class with an assured display in Tashkent.

Britain's Sarah Adlington secured the first bronze on offer as she overcame Daria Karpova of Russia, with the other in the category going to Russian Anzhela Gasparian after she ousted Rakhima Yuldoshova of Uzbekistan.

Rio 2016 Olympics bronze medallist Or Sasson of Israel claimed his country's third title of the event in the Uzbekistan capital as he reigned supreme at over-100kg.

Sasson took gold following a late victory over Iurii Krakovetskii of Kyrgyzstan as he scored waza-ari with just 13 seconds of the final remaining.

Egyptian judoka Ramadan Darwish justified his billing as the top seed in the under-100kg category as he swept aside Russia's Niyaz Ilyasov in the gold medal bout.

Davronbek Sattorov, who won a silver medal at the corresponding event in Tashkent last year, claimed the first bronze by beating Belarus' Mikita Sviryd by ippon.

Asian Championships bronze medallist Sherali Juraev joined him on the podium with victory over Saidzhalol Saidov of Tajikistan.

The other gold medal on the final day of competition was clinched by Tbilisi Grand Prix winner Anastasiya Turchyn of Ukraine as she scored the only point of her gold medal clash against Poland's Beata Pacut.

The first bronze medal contest was won by Yarden Mayersohn, who emerged victorious from her encounter with Zarina Raifova of Kazakhstan.