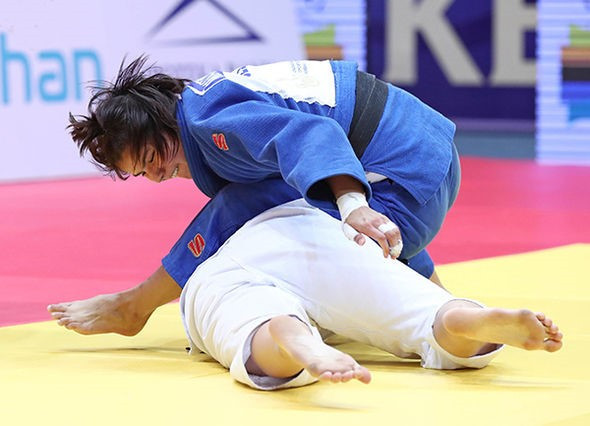 Matniyazova secured the women's under 70 kilograms crown as she tapped out Emilie Sook of Denmark in the final at the Uzbekistan Tennis Courts in the capital city.

Sook's medal represented the first time Denmark had ever finished on the podium at an IJF Grand Prix competition.

Szabina Gercsak of Hungary sealed the first bronze medal on offer with victory over Roxane Taeymans of Belgium.

The other bronze on offer in the category was won by Anka Pogacnik of Slovenia, who beat Russia's Taisia Kireeva.

European Championships bronze medallist Kathrin Unterwurzacher of Austria recovered from her disappointing showing at the World Championships in Budapest as she topped the podium in the under 63kg event.

She was joined on the podium by Russian Ekaterina Valkova, who proved too strong for Andreja Leski of Slovenia.

In the men's categories, Sagi Muki of Israel justified his decision to move up in weight class as he claimed gold in the under 81kg division.

Muki, the 2015 European champion who finished fifth at last year's Olympic Games in Rio de Janeiro at under 73kg, battled past Dagvasuren Nyamsuren as he scored waza-ari two-and-a-half minutes into the golden score period.

Asian Championships bronze medallist Zhansay Smagulov was the other gold medallist on day two of the event in Tashkent as he clinched the  gold medal in the under 73kg category.

Smagulov picked up his second Grand Prix gold medal and first since 2015 as he silenced the home crowd with victory over Giyosjon Boboev of Uzbekistan.

The Kazakh judoka left it late, scoring a match-winning ippon with 22 seconds of the fight remaining.

The competition in the Uzbek capital concludes tomorrow.