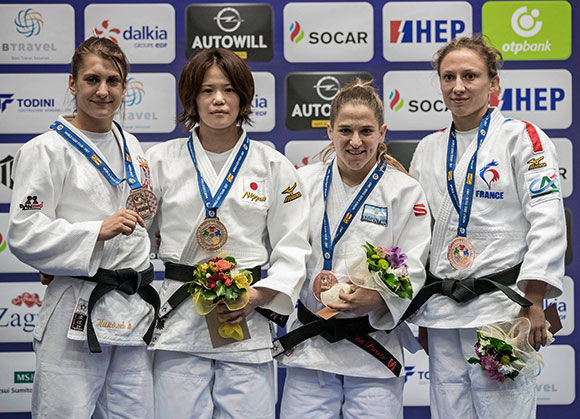 Argentina’s 31-year-old world and Olympic women’s under-48 kilograms champion Paula Pareto, returning to competition after concentrating for the last year on her work as a doctor, won a bronze medal on the opening day of the International Judo Federation’s Grand Prix in Zagreb.

Pareto’s weight category provided the first of five finals on day one at the Sportova Stadium and saw gold go to Japan’s unheralded Endo Hiromi, who followed up her victory over Pareto with a win over the top seed, Milica Nikolic of Serbia.

Endo, who had secured her progress past the diminuitive Pareto by penalty in the golden score, turned Nikolic on her back and immobilised her for ippon.

Pareto won her bronze medal match against Anne-Sophie Jura  of Belgium with waza-ari in the golden score, with the other bronze going to Lucile Duport of France,  who immobilised Maria Siderot of Portugal for ippon.

Brazil’s third-seeded Eleudis Valentim earned the women’s under-52kg gold medal with a waza-ari  and then ippon against home judoka and second seed Reka Pupp, who had been penalised with a shido for passivity.

Jessica Pereira of Brazil and Anja Stangar of Slovenia were bronze medallists with respective wins over Angelica Delgado of the United States and Petra Nareks of Slovenia.

In the men’s under-60kg, Georgia’s top seed Amiran Papinashvili lived up to his ranking as he defeated Russia’s second seed Robert Mshvidobadze with sasae-tsuri-komi-ashi for ippon.

Mshvidobadze’s compatriot Albert Oguzov earned a bronze, with an ippon over Azerbaijan’s Mehman Sadigov, and the other bronze went to Bekir Özlü, Georgian-born but competing for Turkey, who defeated fellow Turkish judoka Ahmet Sahin Kaba.

Yuuki Hashiguchi added a second Japanese gold on the day in the men’s under-66kg category, where he defeated Portugal’s Sergiu Oleinic.

Portugal also suffered defeat in the first bronze medal match, as Joao Crisostomo was outmanoeuvred by Turkey’s Sinan Sandal, while the other bronze went to Italy’s Matteo Medves, winner over Anzaur Ardanov of Russia.

Britain’s world bronze medallist in the women’s under-57kg, Nekoda Smythe-Davis, was narrowly beaten in the final by Momo Tamaoki, who thus secured the third Japanese win on the opening day.

The Briton entered the golden score carrying penalties for stepping out of the fighting area and passivity and, after three-and-a-half minutes of extra time, sustained pressure from Tamaoki provoked a third and decisive penalty.

Home judoka Hedvig Karakas earned a bronze with a victory over top-seeded German judoka Theresa Stoll, who incurred a penalty for a false attack deep into golden score.

Bulgaria’s Ivelina Ilieva claimed the other bronze with a win over Daria Mezhetskaia of Russia.