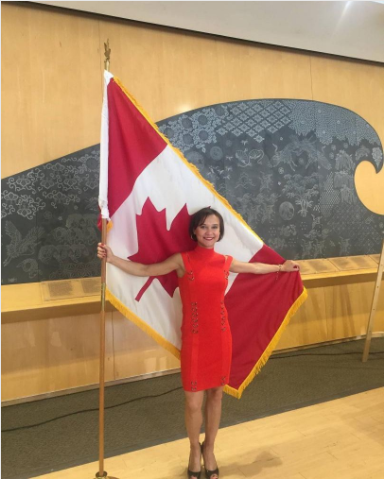 Russian-born figure skater Lubov Ilyushechkina will be able to compete for Canada on the international stage after being granted citizenship.

It comes with less than five months until the start of next year's Winter Olympic Games in Pyeongchang, where Ilyushechkina and Canadian partner Dylan Moscovitch will be hoping to compete.

The duo will not know for certain if they will be representing Canada at next year’s Games until after the 2018 Canadian National Skating Championships, scheduled to take place in Vancouver from January 8 to 14.

But one hurdle has already been overcome with the granting of Canadian citizenship to Ilyushechkina.

"I'm truly fortunate to be granted Canadian citizenship and internationally represent the best country in the world, proud to wear the Maple leaf and be a part of this big family!!!!!!!!

Moscovitch won an Olympic silver medal in the team event at Sochi 201 and is confident he and Ilyushechkina, who have been competing together for three years, have what it takes to secure a ticket to Pyeongchang 2018.

"We’re definitely where we wanted to be heading into the season, and I think we have a good shot at making the team," he was quoted as saying by Postmedia Network.

Ilyushechkina's most notable achievement alongside Moscovitch came at the 2017 Four Continents Championships held in South Korean city Gangneung in February, where skating is due to take place during Pyeongchang 2018.

They claimed the bronze medal in the pairs competition, finishing behind winners Sui Wenjing and Han Cong of China and runners-up Meagan Duhamel and Eric Radford of Canada.

The event was held in Osaka in Japan.