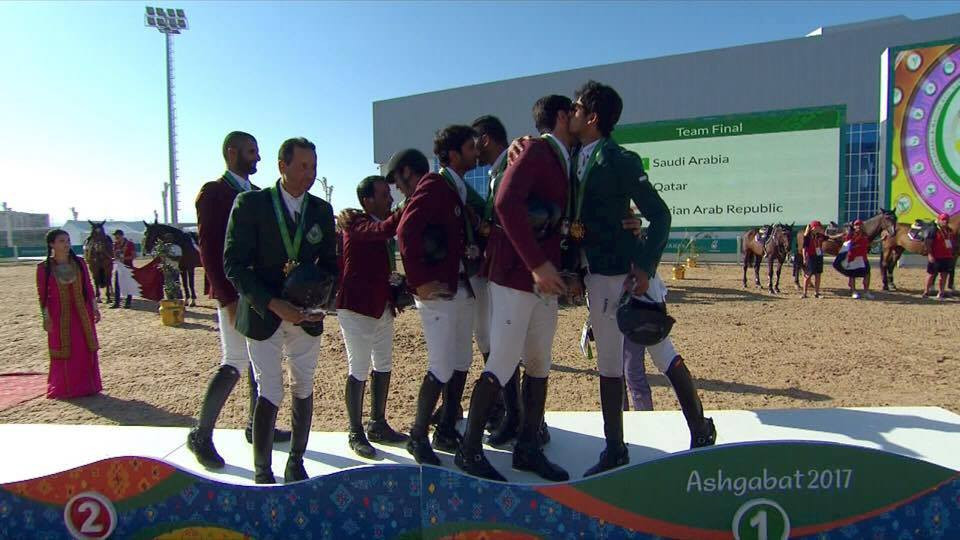 Saudi Arabian and Qatari jumpers embraced on the medals podium in a poignant example of sport trumping politics here today at the Asian Indoor and Martial Arts Games.

It followed a superb performance from final Saudi rider Abdullah Waleed Al-Sharbatly, who kept his cool in the heat of battle at the Equestrian Centre when a single fence down would have cost his team victory.

"There was a lot of pressure and, at the end, I had to take off two strides to the last fence and do five strides to make sure I was inside the time," said Al-Sharbatly.

"I did not want to get a time penalty.

It came after the two Gulf countries were on the brink of war earlier this year as part of an escalating regional rivalry.

A show of emotion such as what was seen on the podium here would certainly not have been permitted in other theatres between citizens of the two countries.

China’s Yuan Wangjian cruised to the gold medals after six successful lifts to finish with an unrivalled total of 223kg at the Weightlifting Arena.

Sasser finished next best thanks to a hoist of 120kg in the clean and jerk that earned her an Oceania record.

She lifted a total of 210kg, while South Korea’s An Sisung took the bronze medal with 208kg.

Turkmenistan’s Rejepbaý Rejepow came out on top in the under-77kg category with a total of 353kg in front of the watching Olympic Council of Asia President Sheikh Ahmad Al-Fahad Al-Sabah.

Rejepow won the snatch with 162kg and the clean and jerk with 191kg.

Uzbekistan’s Shakhzod Khudayberganov was the runner-up in the snatch with 155kg and the clean and jerk with 187kg for a silver medal-winning total of 342kg.

Rounding out the podium was Iraq's Ahmed Al-Hussein, who took the bronze medal with a total of 323kg after finishing third in the snatch with 146kg and the clean and jerk with 177kg.

In taekwondo, the rivalry between China and Chinese Taipei was on full show as each nation won one gold medal at the expense of the other.

Chinese Taipei’s Chen Yu-Chuang made the first strike by beating China’s Zhou Lijun 20-10 in the women’s under-57 kilograms final at the Taekwondo DanceSport Arena.

The tables were then turned in the women's under-67kg final, where China’s Gao Pan proved too strong for Chinese Taipei’s Chen Yann-Yeu with a 7-2 win.

Between these bouts, South Korea’s Seo Kangeun was gifted a 21-6 victory in the men's under-68kg final after Malaysian opponent Rozaimi Bin Rozali notched 10 penalty points to bring an automatic end to the match.

Rozali recently won a gold medal at his home Southeast Asian Games in Kuala Lumpur, but was punished for his indiscipline against Seo on this occasion.

Turkmenistan continue to dominate the medals table after their weightlifting success today.

Thailand and Iran are following a long way behind after each accruing 13 gold medals so far.

Thailand have also claimed 12 silver and 14 bronze while Iran have managed nine silver but 27 bronze.

Uzbekistan are the only nation to have won 10 gold medals - along with 17 silver and 36 bronze.