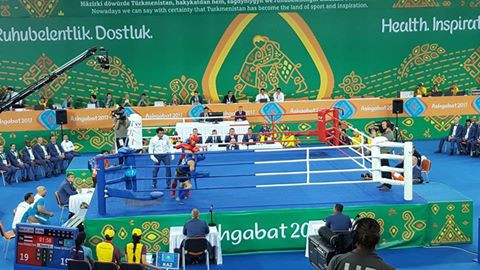 Four of the Southeast Asian nation's titles came in men's competition with Arnon Phonkrathok claiming the first thanks to a 29-28 success over Kazakhstan’s Yelaman Sayassatov in the under-54 kilograms final.

In the first of the three men’s finals not featuring a Thai athlete, Iran’s Keivan Soleimani edged Kazakhstan’s Vadim Loparev 29-28 at under-75kg.

Unhappy with the decision of the judges, Loparev remained in the ring for several minutes in protest before eventually leaving.

Loparev’s compatriot Emil Umayev also opted to delay his exit from the ring after losing 29-28 to Iran’s Majid Hashem Beigi in the under-81kg final.

Bringing an end to the day’s proceedings was the under-86kg final, which saw Iraq’s Shahez Fazil register a devastating stoppage win over Jordan’s Mohammad Al-Barri.

There were also five finals held today in women’s competition with Thailand tasting victory in three of the events.

Janejira Wankrue then stopped Vietnam’s Truong Thi Hong Nga in the under-63.5kg final to make it a hat-trick of women’s gold medals for Thailand.

Completing the medallists in the under-63.5kg category were Lebanon’s Rola Khaled and Iran’s Zahra Boorboorajdary.

Vietnam’s Bui Yen Ly also featured on the list of women’s gold medallists with a 30-27 victory over Iran’s Fatemeh Yavari in the under-51kg final.