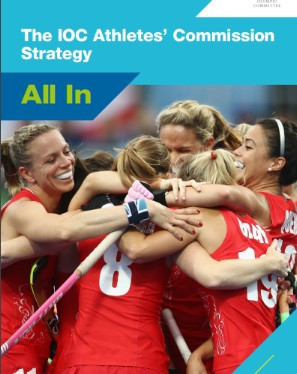 A strategy has been launched aimed at enhancing the role of athletes in the Olympic Movement decision-making process, it was announced here today.

The five-year strategy is being overseen by the International Olympic Committee's (IOC) Athletes' Commission.

Entitled, "All In for Athletes and the Olympic Movement", it is based upon four pillars aimed at strengthening the athletes’ voice.

Empowering athlete participation in Olympic Movement decision-making processes and supporting athlete development have been stressed as two of the main objectives.

Promoting the value of athlete involvement and ensuring the viewpoint of athletes is represented among all Olympic Movement stakeholders have also been targeted.

"This has resulted from months of collective efforts with athletes throughout the Olympic Movement and it now defines the direction that will lead our work over the next five years.

"We believe our strategy is inclusive.

"We are ready to continue this important consultation and collaboration to engage with all athletes across the world to ensure we understand their perspective, and in turn, can engage with the entire Olympic Movement to make sure their voice is part of the decision-making process.

"To do this, we must be 'All In' and all stakeholders must be part of this."

The strategy follows after a 10-month consultation process with athletes and stakeholders.

The process involved athletes' commission members from continental associations and International Federations, IOC leadership and other stakeholders within the Olympic Movement.

The process was led by James Tomkins, Australia's three-time Olympic gold medallist, who is now a member of the IOC Athletes' Commission.

It is hoped the strategy will support athletes to succeed in their sporting and non-sporting careers, as well as create an effective global athletes' commission network.

The strategy will be subject of discussion at the International Athletes' Forum from November 11 to 13 in Lausanne.

Ruggiero also revealed  a charter of athletes' rights and responsibilities is set to be created over the coming months.

It is claimed the charter will be for all athletes, both Olympic and non-Olympic, and will address various topics including integrity and clean sport, sports competition, governance and career transition.

The Commission promised it will include direct engagement with athletes and various other organisations, including World Anti-Doping Agency, the Association of National Olympic Committees and International Federations.

Ruggiero also revealed that the IOC has strengthened its support to athletes, through programmes their Athlete Career Programme and the Athlete Learning Gateway.

The strategy can be found by clicking here.