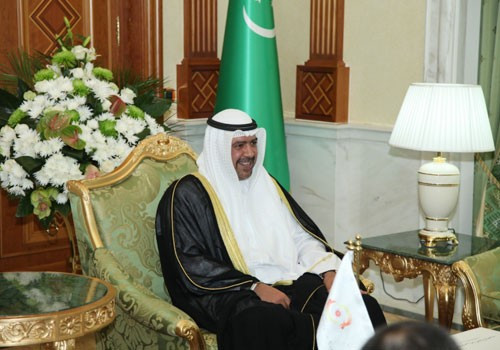 Sheikh Ahmad Al-Fahad Al-Sabah will miss this week's International Olympic Committee (IOC) Session here to travel to Turkmenistan, it has been confirmed.

insidethegames had revealed yesterday that Sheikh Ahmad had told IOC President Thomas Bach he believed he needed to be in Ashgabat to finalise preparations for the 5th Asian Indoor and Martial Arts Games (AIMAG).

The Olympic Council of Asia (OCA) have now confirmed that Sheikh Ahmad, their President, will not be attending the event here.

"Sheikh Ahmad Al-Fahad Al-Sabah will reluctantly miss the IOC Session in Lima due his commitments to attend the Asian Indoor and Martial Arts Games in Ashgabat, Turkmenistan from 14 September, with the Opening Ceremony to be held on 17 September 2017," the OCA said in a statement.

"Up to 20 heads of state are attending AIMAG 2017 and will be arriving from 15 September, so it is natural for Sheikh Ahmad to join Turkmenistan President Gurbanguly Berdimuhamedow to welcome them all."

The Games are expected to be attended by 6,000 athletes from 65 countries from Asia and Oceania competing in 21 sports.

it is the first time that so many National Olympic Committees (NOCs) from Oceania have competed in a major event organised by the OCA.

"Sheikh Ahmad also looks forward to welcoming all of Asia’s NOCs and NOCs from Oceania that will officially compete and be able to win medals in the AIMAG for the first time," the OCA statement said.

"The Opening Ceremony date has been set in stone for five years and could not be moved.

"In addition there will be a number of OCA meetings taking place from 14 till 20 September.

"It would therefore not be possible for Sheikh Ahmad to get to Ashgabat in time for 15 September if he were to stay in Lima for the vote to confirm the host cities for the 2024 and 2028 Olympic Games, which takes place on 13 September.

"For this reason Sheikh Ahmad reluctantly decided to go straight to Ashgabat to oversee the final preparations for AIMAG 2017."

OCA officials insist that Sheikh Ahmad's reason for not coming here is not connected to an inquiry in the United States linking him to allegations of fraud.

He resigned from FIFA's ruling Council in April a day after he was identified as a co-conspirator by the United States Department of Justice in the case involving Richard Lai, the FIFA Audit and Compliance Committee member banned for bribery.