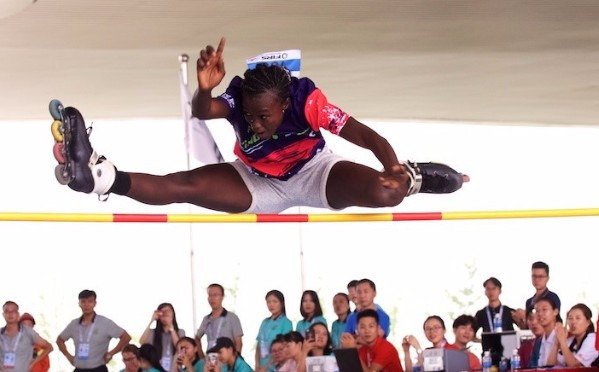 History was made on the final day of the 2017 World Roller Games in Nanjing as an African nation took gold in a skating discipline for the first time.

Balde managed to break the women's world record of 1.19 metres, which was previously held by France's Maeliss Conan.

Fall then continued an emphatic day for Senegal as he won the gold medal in the men's equivalent after jumping a best of 1.59m to seal victory.

He also tried to break the world record with 1.61m but unfortunately failed on all three occasions.

France's Sebastien Rastegar won the men's final in a time of 47.404sec, proving too strong for Italian Agostino Tussetto, who could only take second on 58.073.

Christian Montavon of Switzerland beat another Frenchman, Nicolas Varin, to bronze as he won the small final in 48.380.

She pipped France's Emilie Sadoux in the final in a time of 50.047.

Sadoux took silver in 51.726 while Germany's Antonia Borsig rounded out the podium by winning the small final in 1:01.011.

Following the conclusion of competition in Nanjing today, Colombia finished top of the medals table after amassing 45 in total including 23 golds, 12 silvers and 10 bronzes.

Italy finished in second place on 76 overall, but only 20 golds, while France completed the top three on 24 in total, including 11 titles.

"An extremely interesting medal table shows how much our sports are widely practised all over the world," said World Skate President Sabatino Aracu.

"I am so proud to see all five continents represented with their top athletes."