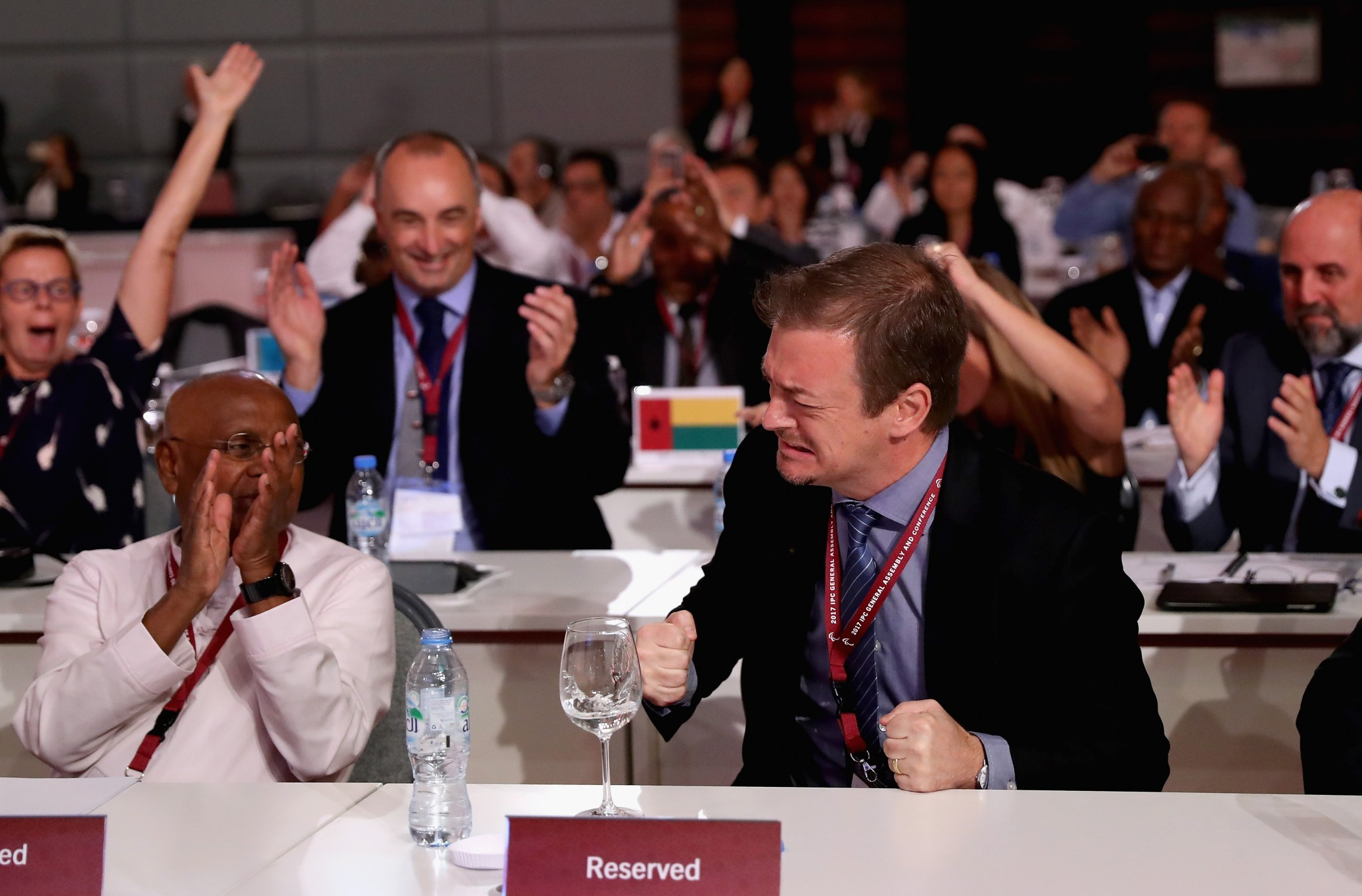 Andrew Parsons has been elected as the new President of the International Paralympic Committee (IPC) here today at the governing body's General Assembly.

The Brazilian becomes only the third President of the organisation, succeeding Sir Philip Craven whose 16-year tenure has come to an end.

Parsons triumphed in the first round of voting, achieving the required absolute majority of 82 votes with a tally of 84.

Only one of the 163 voting members did not cast a vote.

"I can only say thank you very much to the membership for being elected," Parsons said.

"It's really difficult to say the words.

"I have a thunderstorm in my mind right now, but I do want to thank the membership for trusting in me.

"I would also like to thank the three candidates who ran with me in this election - Patrick, John, Haidi.

"Thank you very much, it made this competition even stronger so I think we were four candidates offering very good options to the membership.

"This is probably the happiest day of my life after the birth of my daughter and the day I got married with Marcela.

"After 20 years in this Movement, it's amazing to be elected President of this incredible organisation - an organisation that has come a long way facing many different difficult issues, but we are stronger than ever.

"We will move to the next level with your support.

"Again, I have said that this is going to be an organisation for all.

"Please, rest assured that this will start from day one.

"Thank you very much."

The new President Andrew Parsons meets the members who elected him. #IPCGA2017 pic.twitter.com/L80fYgrBSY

"I would like to congratulate Andrew on his victory which was achieved in the first round and wish him the best of luck in his new role," Sir Philip said.

"I would also like to pay tribute to Patrick Jarvis, John Petersson and Haidi Zhang for their election campaigns."

The China Disabled Persons' Federation's director of sport Zhao Su-jing lodged an appeal against the results and asked for permission for the organisation's lawyers to check the outcome of the voting.

It was quickly turned down, however, by the IPC.

"We have confirmed with our legal counsel and we have determined that the results are final and that all of the voting procedures were followed," Mark Copeland, a member of the IPC Electoral Commission, said.

"They were witnessed and they were signed off, so those results are final."

An IPC spokesperson told insidethegames the appeal stemmed from election session chairperson Robert Steadward, a former IPC President, accidentally stating there had been 163 votes cast, when in fact the number was 162.

Petersson, a 15-time Paralympic medallist and six-time champion, was also in the running for the IPC vice-presidential role, but he lost 81-79 to fellow swimmer Duane Kale of New Zealand in an incredibly tight vote.

"I'd like to thank John - we competed not in the same classification, but we are both swimmers and we know what close racing is all about," Kale, a four-time Paralympic champion, said.

"It doesn't get much closer than that.

"It's a real honour and a privilege to be elected by you - I thank you for that.

"You had a tough decision, I appreciate that, and for those who had a different choice or decision, you can trust that I will support and listen to you as much as anybody else."

Parsons added: "I'd just like to thank John again, that was very close.

"We had two very good candidates for vice-president.

Rounding out today's proceedings was the members at large elections with 10 positions available from 20 candidates.

In the first round, Japan's Yasushi Yamawaki, the United Arab Emirates' Mohammed Alhameli and Great Britain's Tim Reddish all secured their places.

Each member cast up to 10 votes for their preferred candidates, but were not required to vote for a full 10.

Yamawaki, Alhameli and Reddish achieved the required absolute majority of 82 votes with tallies of 123, 102 and 87 respectively.

The nominee with the least number of votes after each round did not proceed to the next.

They achieved the required absolute majority of 82 votes with tallies of 85, 84 and 83 respectively.

In the third round, the US' Marianna "Muffy" Davis was elected after achieving the required absolute majority of 82 votes with 84.

In round five, none of the remaining candidates achieved the required absolute majority of 82 votes with Colombia's Juan Pablo Salazar on 80, The Netherlands' Rita van Driel on 77, China's Jia Yong on 63 and Morocco's Hamid El Aouni on 57.

El Aouni subsequently dropped out with the three other candidates going forward to a re-vote.

The composition of the Governing Board was complete after the sixth round as Salazar and Van Driel both achieved the required absolute majority of 82 votes with 96 and 94 respectively.

Yong missed out after garnering 81 votes.