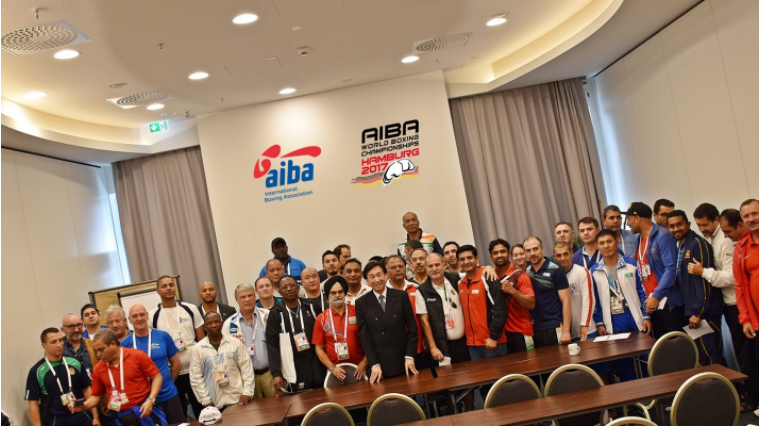 International Boxing Association (AIBA) President C K Wu has met with the National Federations gathered here for the 2017 World Championships to reflect on the event and to look ahead through the Olympic cycle to Tokyo 2020.

Also present at the meeting was International Olympic Committee (IOC) sports director Kit McConnell, who outlined the key changes planned for the 2020 Games.

In June, the IOC Executive Board decided to remove two men's boxing events from the Olympic programme in order to make way for two additional female ones.

AIBA had been hoping to add the extra female events and only sacrifice men's quotas rather than actual medal events.

It is up to AIBA to propose exactly which men's events will be cut from the programme.

As things stand, when the Games take place in Tokyo in three years’ time there will be eight men’s and five women’s divisions.

"I thank Mr Kit McConnell for his presentation of the IOC’s plan for Tokyo 2020, which made it clear that boxing’s position as a central sport within the Olympic Games remains unchanged," Wu said.

"I am delighted for our athletes that after our re-alignment towards gender equality, boxing’s quota of medals has remained the same."

McConnell is said to have emphasised the quality and professionalism of AIBA’s proposal to maintain 10 men’s weight categories and incorporate two more for women.

He underlined, however, that the number of athletes and events has now been set in accordance with Olympic Agenda 2020.

The 2017 World Championships, which concluded this evening, took place under a cloud.

It came after a total of 13 of 15 members of the ruling AIBA Executive Committee opposed Wu at a meeting in Moscow in July before setting up a rival Interim Management Committee (IMC) in an attempt to bring about his removal.

An Extraordinary General Assembly is likely to be held in October in Lausanne at which national governing bodies - as statutes dictate - will decide on whether Wu retains his position.

The IMC claim this crucial meeting, however, will take place in Dubai on November 12 and would like a pre-meeting to be held in the same city on September 23.

In July, European Boxing Confederation President Franco Falcinelli, who is a member of the IMC, questioned the IOC's decision to remove two men's events from the Olympic programme for Tokyo 2020.

Falcinelli said he is "very happy" to have two more women’s categories, pointing out that it was "our old request to the IOC in order to recognise the growing number of women who practice boxing worldwide".

But in order to respect gender equality, the Italian believes the IOC "cannot penalise the male weight classes".

Falcinelli suggested that the men’s light flyweight category could be the one to be sacrificed, claiming that it usually has the least boxers and "most of them have a difficult time reducing their weight".

Falcinelli recognises, however, that this would still mean four women’s boxers in each category having the chance to reach the podium by winning just one bout, as was the case at London 2012 and Rio 2016.

He has, therefore, proposed that there should be only one bronze medal available in each of the women’s categories, meaning beaten semi-finalists would go head-to-head in a battle to round out the podium rather than sharing it.