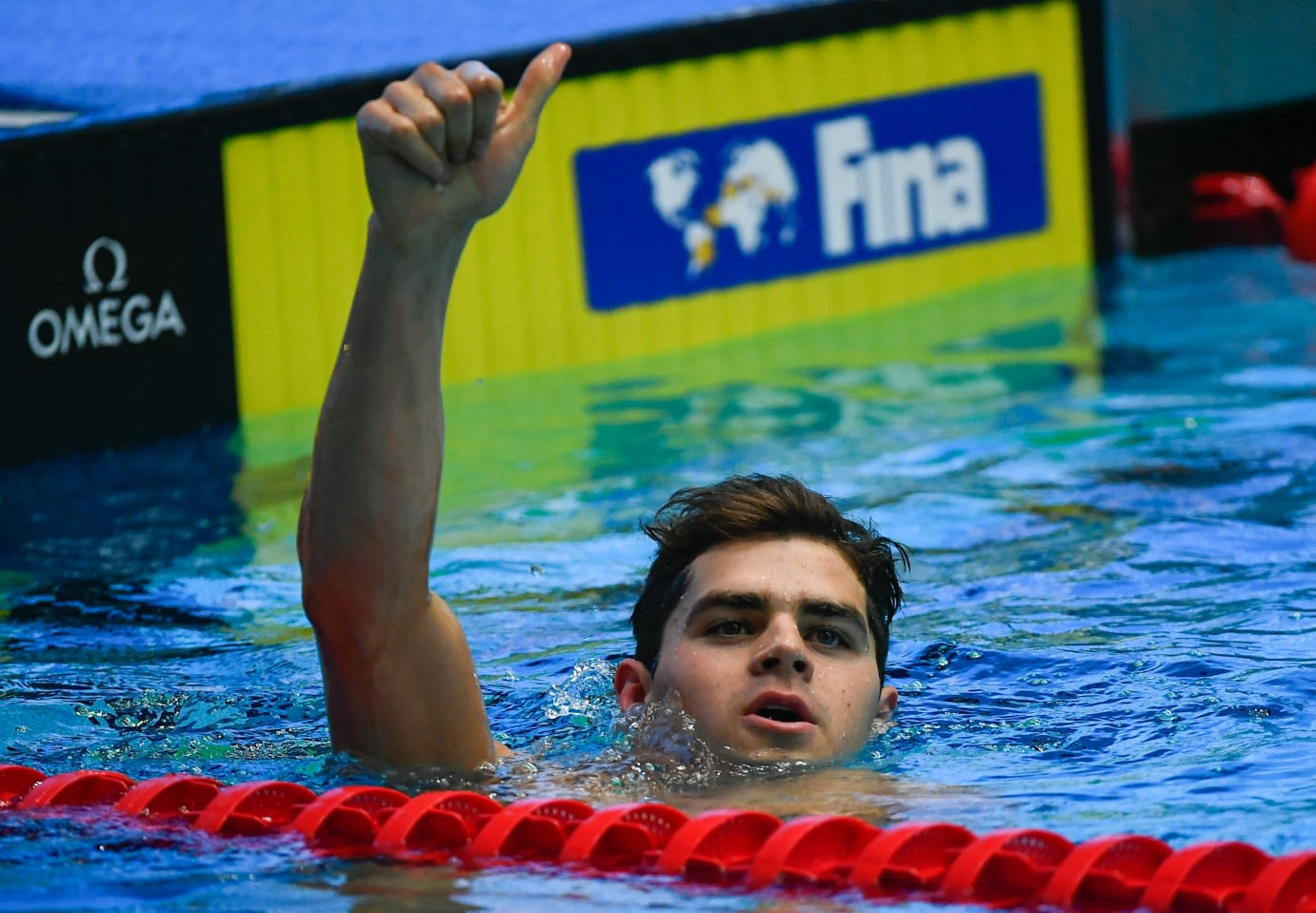 The American finished in 23.22sec at Indiana University Natatorium, beating his previous best mark of 23.27 set in yesterday’s semi-final.

He also has wins - and world junior records - in the 50m freestyle and 50m backstroke, as well as a bronze medal in the 100m breaststroke.

"Coming into the meet, the goal was to swim as fast as I possibly could and for that to have happened up to this point, I’m super satisfied," Andrew said.

Russia’s Andrei Minakov was the runner-up in the 50m butterfly with a time of 23.53, while Hungary’s Kristóf Milák, the 100m butterfly gold medallist, came third in 23.72.

Canada's women continue to reign in the freestyle relays, setting another world junior record in the 4x100m event.

Taylor Ruck, Penny Oleksiak, Rebecca Smith and Kayla Sanchez clocked a time of 3:36.19 to shave 3.68 seconds off the mark set by Australia at the 2015 FINA World Junior Championships in Singapore.

The US took the silver medal in the women’s 4x100m freestyle, finishing 3.5 seconds behind the Canadians.

Japan’s quartet were 4.4 seconds off the pace in third place.

Among today’s other winners was Argentina's Delfina Pignatiello, who posted a Championship record on her way to winning the women’s 1,500m freestyle.

Pignatiello's time of 15:59.51 was the first swim under 16 minutes for a female swimmer in the six editions of the global event.

Hungary’s Ajna Késely, the winner of the 400m freestyle, touched the wall 16.17 seconds behind Pignatiello.

She finished third behind the same two women in the 800m freestyle.

In the women’s 50m backstroke, Canada’s Jade Hannah and Japan’s Natsumi Sakai both stood at the top of the medals podium after clocking the same time of 27.93.

Hannah and Sakai were the bronze medallists in the respective 100m backstroke and 200m backstroke events earlier in the Championships.

The US’s Grace Ariola finished 0.18 seconds behind the winning co-champions to earn her first individual medal.

It ensured the 18-year-old his third medal of the event having previously won gold in the 100m backstroke and silver in the 50m backstroke.

Exactly one second behind Gonzalez was Hungary's Márton Barta as he improved on the bronze medal he received in the 200m individual medley.

Fellow Hungarian Balázs Holló's third-place finish in 4:16.78 means he now has a medal of each colour.

He earned the silver medal in the 400m freestyle and was a member of Hungary’s world junior record-breaking 4x200m freestyle relay team yesterday.

Action in Indianapolis is due to conclude tomorrow.