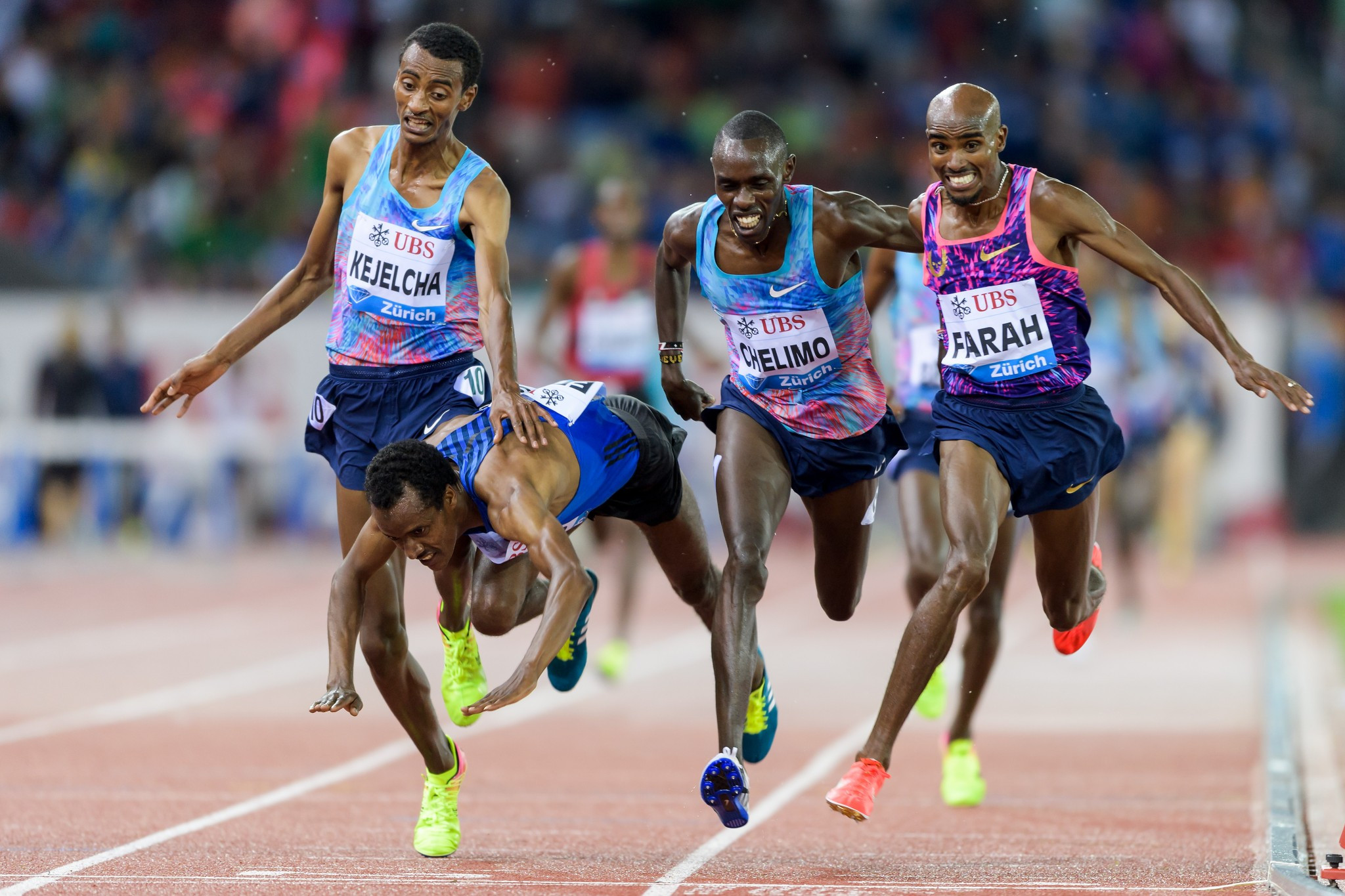 Britain’s multiple world and Olympic champion Mo Farah signed off as a track athlete on a winning note in what was perhaps the closest race in his illustrious career at the first of the International Association of Athletics Federations (IAAF) Diamond League finals at the Letzigrund in Zurich.

Sir Mo edged ahead of three talented and determined rivals, including the Ethiopian who beat him to the world title earlier this year, Muktar Edris, to win the 5,000 metres.

It was a first Diamond Trophy for the 34-year-old Briton who has won 10 global titles on the track.

"I wanted to win, and it is amazing that I have won," said Sir Mo.

"But it was hard work!

"I will miss the track, the people, my fans."

On a night which provided so many surprise results that it resembled a one-day version of the IAAF World Championships  earlier this month, Sir Mo's ompatriot Chijindu  Ujah provided one of the biggest shocks,

He defeated a men’s 100m field that included the controversial American world champion Justin Gatlin, who beat Usain Bolt into third place in the Jamaican’s last individual race in London.

Ujah, one of the sprint relay quartet that earned gold ahead of the United States at the Olympic stadium became an unheralded winner of a Diamond Trophy – and accompanying cheque of $50,000 - with a season’s best of 9.97sec.

Ujah won by thousandths of a second from the Ivory Coast's Ben Youssef Meite, who was given the same time, and the first American man home, Ronnie Baker, who clocked 10.01, with Gatlin fourth in 10.04.

"This is like a personal revenge for the World Championships for me," said Ujah.

"I was pretty upset not to be in the final, so today I redeemed myself.

"It is great to beat the world champion."

Isaac Makwala, whose World Championships contained much drama and no medals, took his first Diamond Trophy with a 400m victory in 43.95 from Gil Roberts of the US, who clocked 44.54 after Steven Gardiner, the world silver medallist from The Bahamas,  failed to finish.

The Botswanan ran a solo 200m time trial in London after returning to competition having been unwillingly ruled out of the 400m with sickness, and followed it up with some press-ups as if to underline his rude health.

The press-ups were employed again on this occasion.

Another athlete who finished out of the medals in London, Bahrain’s world 3,000m steeplechase record holder Ruth Jebet, re-asserted herself in style by earning her second Diamond Trophy in a meeting record of 8:55.29, the fastest time run this year and second on the all-time list behind her own mark of 8:52.78.

"I wanted to run this time in London but the weather was not good enough," said the 20-year-old former Kenyan.

Kenya’s Beatrice Kipkoech, fourth in London - and a place above Jebet - despite having to double back after running wide of the water jump - was second in a personal best of 8:59.84 that puts her fourth on the all-time list.

One of the other performances of the night came in the women’s 200m, where the Olympic 400m champion Shaunae Miller-Uibo, who seemed about to add the world title in London earlier this year before faltering 20 metres from the line, ended her season on a high as she secured her first Diamond Trophy with a Bahamian record of 21.88.

That proved too much for Jamaica’s Olympic 200m champion Elaine Thompson, second in 22.00, and the double world 200m champion Dafne Schippers of the Netherlands, fourth in 22.36 behind the world 100 and 200m silver medallist Marie-Josee Ta Lou of the Ivory Coast, who clocked 22.09.

Renaud Lavillenie’s unique record of having won the Diamond Trophy in the men’s pole vault on every occasion since the IAAF Diamond League began in 2010 came to a sorry end.

The London 2012 champion and world record holder failed to clear his opening height of 5.63 metres, with victory going to America's world champion Sam Kendricks, who cleared 5.87.

She finished ahead of Kelsey-Lee Roberts of Australia, who threw a personal best of 64.53, and Croatia’s Rio 2016 champion Sara Kolak, who reached 64.47.

Germany’s Olympic javelin champion Thomas Rohler, who finished out of the medals as his compatriot Johannes Vetter took World Championship gold in London, won his domestic battle on the night with a best of 86.59m to Vetter’s 86.15m.

It was not enough to earn Rohler the Diamond Trophy, which was defended successfully by the Czech Republic’s Jakub Vadledjch, who won with 88.50m.

Victory in the men’s high jump went, as expected, to Qatar's world champion Mutaz Essa Barshim, who only had to jump 2.33m to see off all opposition, although he went over 2.36m at his third attempt.

The women’s 800m was equally predictable as world and Olympic champion Caster Semenya won a second Diamond Trophy in 1:55.84 ahead of the women who followed her home at Rio 2016, Francine Niyonsaba of Burundi, who clocked 1:56.71, and Kenya’s Margaret Wambui, who ran a personal best of 1:56.87.

Norway’s Karsten Warholm, surprise winner of the world 400m hurdles title, ran a national record of 48.22 but still had to settle for second place behind Kyron McMaster of the British Virgin Islands, who tops the 2017 lists with 47.80 and won a first Diamond Trophy in 48.07.

Australia’s 30-year-old London 2012 champion Sally Pearson, who came back after two injury-ravaged years to regain her world 100m hurdles title earlier this month, finished on a high as she claimed her first Diamond Trophy in 12.55 - the same time credited to second-placed Sharika Nelvis of the US.

As if to point up the dramatic possibilities of the changes made to this year’s Diamond League competition - in which all the foregoing meetings served only to qualify eight or 12 athletes, depending on the event, with an equal chance of winning in the final - the first Diamond Trophy under the new format went to someone who had not won a previous international event all season.

To be fair, the winner was hardly without pedigree, given that it was Kazakhstan’s London 2012 triple jumper Olga Rypakova.

Her best effort of 14.55m, during some of the worst of the evening’s weather, proved enough to defeat the two women who have been contesting supremacy in the event all year - Venezuela’s 21-year-old newly minted world champion Yulimar Rojas, who fell just three centimetres short of the Kazakh jumper, and Colombia’s 33-year-old Rio 2016 champion Caterine Ibarguen.

Kenya’s Timothy Cheruyiot had to settle for silver in the world 1500m final but he earned his first Diamond Trophy with a time of 3:33.93 as his London gold medallist Elijah Manangoi finished third in 3:34.65.