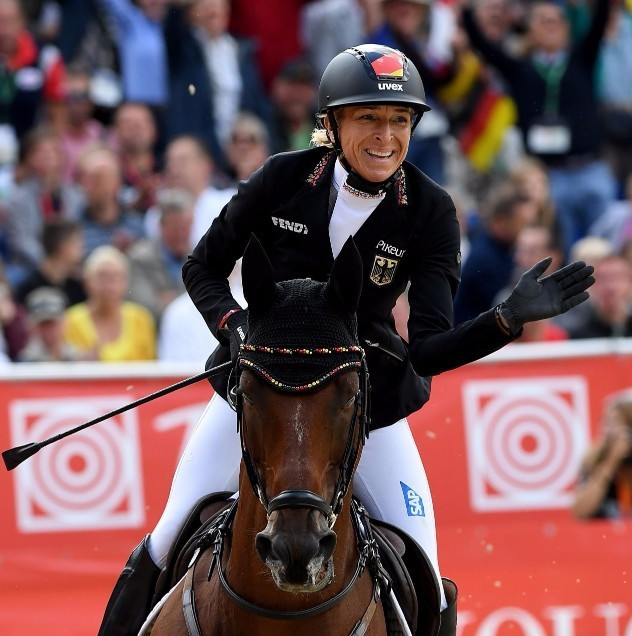 Germany’s Ingrid Klimke earned the first big individual title of her career as she won the International Equestrian Federation (FEI) European Eventing Championships in Poland - but her country’s run of three team successes was brought to an end by Great Britain.

Klimke, five times an Olympian and twice a team eventing gold medallist, had taken the lead on Horseware Hale Bob ahead of compatriot Michael Jung following the cross-country and she maintained her position in the show jumping finale at the Stragona Equestrian Center in Strzegom.

"You just have to keep going and after 20 years it will happen," said the 49-year-old Klimke.

"I always want to be a team player, but this was my dream."

Wilson’s clear round was matched by her team-mates Kristina Cook on Billy The Red and Ros Canter on Allstar B, who finished fourth and fifth overall, enabling Britain to maintain the lead they had taken yesterday.

The defending champions had seemed set for another triumph after setting a record team score of 87.7 penalties in the opening dressage, but three clear rounds in the cross-country earned Britain a narrow advantage of two fences going into the show jumping, which they held onto to win this title for the first time since 2009.

In the end, Britain finished on 113.9 points with Germany taking the silver medal on 123.0.

"I can't put it into words how impressed I am, I just couldn't be more proud," he said.

"They all rode exactly as they trained and what they're capable of.

"We now want more golds, for as long as we can."

Sweden held onto the team bronze medal ith a score of 148.4 points but Sara Algotsson Ostholt had a less than happy jumping round on Reality 39 and dropped from third to ninth.