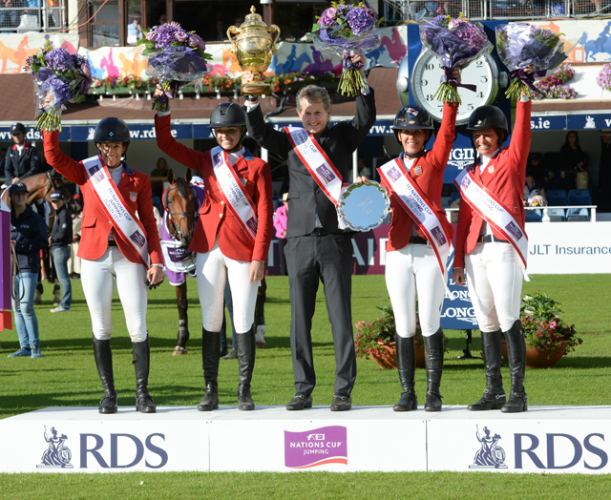 United States became the first ever all-female team to win in the 91-year history of the Nations Cup Jumping competition at the Aga Khan Cup in Dublin.

The event, which now forms the eighth and last leg of the International Equestrian Federation (FEI) Nations Cup Jumping Europe Division 1 League, saw the American pull away from the Irish hosts after halfway at the RDS venue.

A team consisting of Lauren Hough, Lille Keenan, Beezie Madden and Laura Kraut finished on the only zero score of a hard-fought competition.

Hough and Kraut were the stars as each managed double clear rounds and Keenan and Madden managed one apiece.

"There’s no other feeling like winning a Nations Cup for your country and to be winning in Dublin is extra special," said Keenan.

"Competing here and having a result like this has been a goal since the beginning."

The Netherlands' Michael Greeve, Donor Kuipers, Michel Hendrix and Frank Schuttert finished on a score of seven for the bronze medal.

Mistakes in the second round cost Ireland as they finished fifth on 17 points - two behind fourth placed Spain.

All eight nations from Europe Division 1 are due to compete at the FEI Nations Cup Jumping Final 2017 at the Real Club de Polo in Barcelona from September 28 until October 1.

Spain will also participate due to their host nation status.