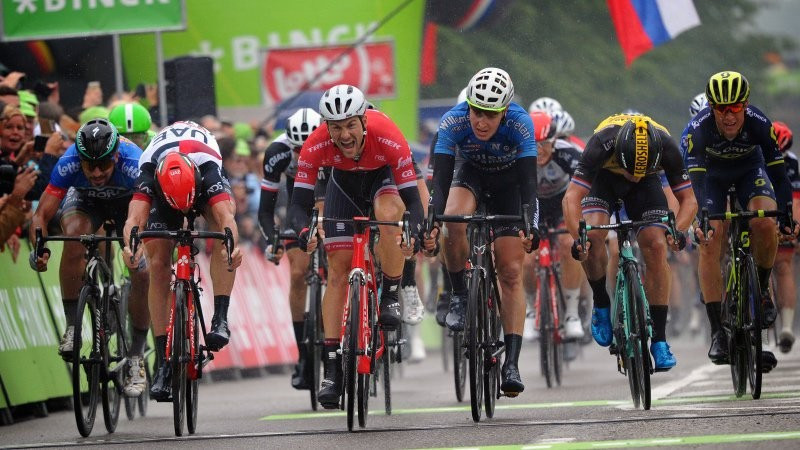 Belgium’s Edward Theuns claimed victory on the fourth stage at the BinckBank Tour in a tight sprint finish in Lanaken.

The 154 kilometres flat stage, which began and ended in Lanaken, was expected to conclude in a sprint finish.

It came as a surprise then when Lotto Soudal sprinter Andre Griepel was involved in the day’s breakaway, with the German being joined by his countryman Nils Politt and The Netherlands’ Pim Ligthart as he looked to regain form.

The trio were prevented from moving too far clear of the peloton during the stage, their break eventually ending with 25km to go.

Britain’s Alex Dowsett and New Zealand’s Dion Smith attempted to surprise the sprinters by launching an attack in the closing 15km, but their effort was thwarted 10km later.

When the pairing were caught, Belgium’s Yves Lampaert launched a counter attack in a bid to take a solo victory in front of a home crowd.

The Quick-Step Floors rider nearly achieved the unlikely feat, holding off the main field until the closing 150 metres of racing in the International Cycling Union World Tour event.

He was swept up as the sprinters reached their peak speed, Theuns coming through to take the victory in 3 hour 24min 23sec.

Theuns, representing Trek-Segafredo, was followed across the line by Slovenia’s Marko Kump and Tim Merlier of Belgium.

The power of emotions. What a fantastic reaction of @EdwardTheuns after his win in the #BinckBankTour pic.twitter.com/eOdzRp7Pwp

Slovakia’s world champion Peter Sagan, winner of the first and third stages, missed out on the 100th professional victory of his career by finishing in fourth place.

The result prevented him from closing on the general classification lead, with Switzerland’s Stefan Küng remaining at the head of the standings.

He is followed by Poland’s Maciej Bodnar, four seconds behind, with The Netherlands’ Tom Dumoulin and Sagan a further five seconds down.

The race, which features stages in Belgium and The Netherlands, is due to continue tomorrow with a 167km stage in Sittard-Geleen.