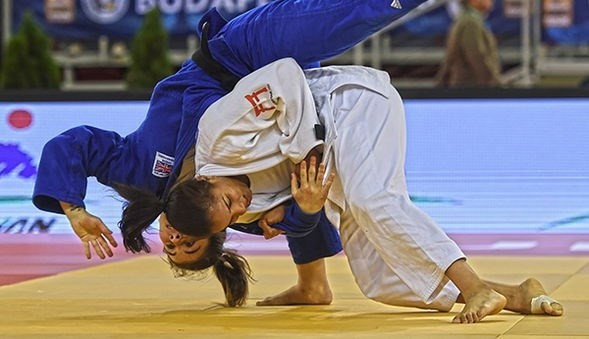 The International Judo Federation (IJF) is predicting the mixed team event, due to held in the same format as proposed for the 2020 Olympic Games in Tokyo, will be one of the highlights of this month's World Championships in Budapest.

Confirmation of the decision to add the event to the Tokyo 2020 programme came in June.

It will feature at a senior World Championships for the first time this year, bringing an end to seven days of action in Budapest on September 3.

"The atmosphere of a judo team event has to be experienced live and in person as judo's not-so-hidden gem, which perfectly embodies the Olympic values and spirit, has reached new heights with a world-class presentation and riveting action," the IJF said in a statement.

"The mixed team event is tipped to redefine team sports at Tokyo 2020 and - with judo's constant evolution and a new set of rules seeing the sport gain more traction in the media and with spectators - it all starts in Budapest with Japan - who won the final men's and women's team events in 2015 - the nation to beat on what will be a thrilling day of judo."

In June, the IJF held a special event in Budapest to promote the World Championships.

The event, co-organised with the Hungarian Judo Association (MJSZ), saw around 1,000 judoka gather at Heroes Square in the heart of the city to launch 2,017 messages from the same amount of homing pigeons.

The 2,017 homing pigeons carried messages written by local competitors of all ages across the country.

The World Championships are due to be held at the László Papp Sportaréna.

World titles will be available in seven men's and seven women's weight divisions, while there will also be two team titles on offer.

Budapest was chosen to host the World Judo Championships ahead of China, Mongolia and Qatar in March 2015.

Hungary’s capital has staged successful events on the IJF Grand Prix circuit and also held the European Championships in 2013.

The 2015 IJF World Championships were hosted by Kazakhstan's capital Astana.