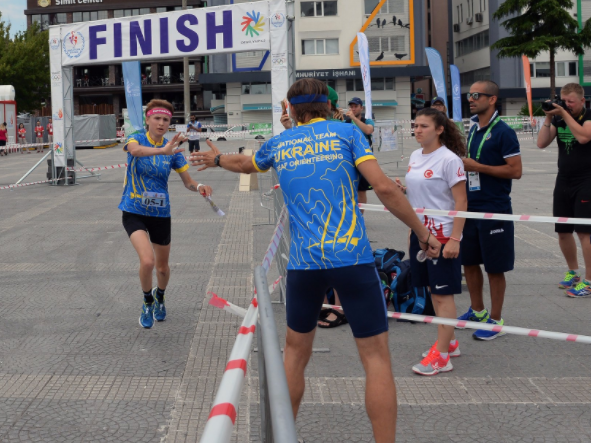 Ukraine held off Russia by just 31 seconds after more than an hour of racing to claim the mixed team relay orienteering title at the 23rd Summer Deaflympics in Samsun today.

Russia's team contained both gold medal winners from the sprint distance finals earlier in the week, Mariia Makarova and Nikita Smirnov, but could not match their rivals.

The pair, featuring on the first two legs, were unable to gain the lead after an impressive opening two performances from Ukrainian duo Iana Melnyk and Oleksandr Selkin in Republic Square.

At one stage, the lead was almost up to three minutes before it gradually began to close.

Viktor Dinges of Russia narrowed the gap to Dmytro Plakhotnik of leg three before Antonina Naidionova reduced it further against Hanna Fedosieieva.

Ultimately, however, Ukraine hung on to take the first non-Russian gold of the week in the sport.

A struggle against time! The enthusiasm of orienteering embrace the streets of Samsun! #Deaflympics2017🤗⬆️↗️➡️↘️⬇️↙️ pic.twitter.com/vLAO9xQ5uW

Dmitry Andreevich Rozanov added a second title to the time trial gold he claimed earlier in the week after breaking clear to triumph in 2 hours 33min 38sec.

Team-mate Ivan Vladimirovich Makarov came second, 17 seconds behind over the 100 kilometres distance, and Adrian Babic of Slovakia crossed a further five seconds back in third.

Both crossed in 2:20:53 as Aleksandra Evdokimova ensured a Russian podium presence in third, four seconds back.